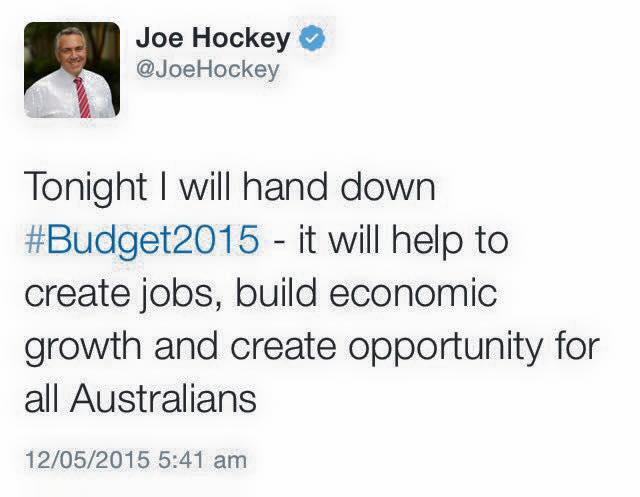 The Budget is Coming

Believe it or not it’s that time of year again. This time last year, the Abbott government announced their very first Federal Budget; which you might remember caused some outrage.

In typical fashion, some of tonight’s Budget details have been leaked, and apparently Australians can expect more taxes, including a “Google tax” and a “Netflix tax”.

Other proposed changed will allegedly see small businesses receive a tax break, as well as incentives for people to start small businesses which will see the application process more streamlined, and some of the registration fees waived.

Here it is, straight from the horse’s mouth.

All will be revealed tonight at 7:30pm, when Treasurer Joe Hockey begins his speech, and I envisage many households around the country participating in one of two activities; yelling at their televisions, or engaging in Budget drinking games. Perhaps both, where the drinking game will result from the yelling and screaming.

One thing’s for sure, there will be numerous terms used by Hockey that are complex and confusing. So to ease your pain, I’ve constructed a ‘Budget Jargon for Dummies’ dictionary that should get you through this evening. If not, then there’s always that drinking game I mentioned before.

Debt: what Australia is currently in. The revenue amount for that year is not enough to cover spending, and so the government must borrow the money from financial markets or investors

Deficit: you guessed it, what Australia is currently in. Basically, it’s a shortfall. Governments are concerned with returning the budget to surplus (gains) where they can start repaying their debt. When the spending is more than the revenue, a deficit is created

Fiscal: really just a word the government puts before other words (eg. year, imbalance, strategy) that refers to their revenue and spending

Forward Estimates: literally means four years. It’s the projections (of both spending and earnings) for the following four financial years

GDP: (gross domestic product). It’s the value of how much Australia has provided in goods and services annually

MYEFO: (Mid-Year Economic Fiscal Outlook). It’s just an update that the government will release midway through the financial year to present an overview of how things are going after the previous Budget announcement

Nominal GDP: similar to the GDP, but its value has not been adjusted to include inflation. It’s the best indication of current market values, and shows how much the economy has grown or shrunk in that year

Temporary Budget Repair Levy: previously referred to as ‘Debt Levy’. A term introduced by Hockey in last year’s Budget announcement and means that taxpayer with taxable income over $180 000 will incur a levy of 2%.

I image we can expect some brand new terms coined tonight, but hopefully the above will help you decode the speech a little bit to understand what’s really going on, and how it’s going to affect you.

Happy Budget Day, and I’ll see you all on the other side.

Share
Previous Hacks, Lies and the Third Estate: Your post-election wrap up
Next Pink