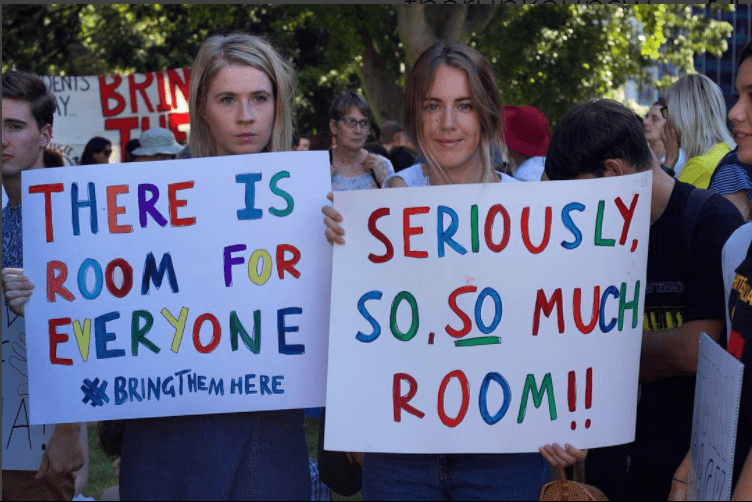 UNSW students were among thousands who gathered at Hyde Park on Sunday to rally for change in asylum seeker policy.

The UNSW SRC and Amnesty International UNSW marched alongside a diverse but unified crowd as part of one of many Palm Sunday Rallies held around the country.

Speakers in the lead up to the march stressed the need for a change and called for compassion, dignity and justice for refugees.

With the recent chemical attacks in Syria and the US retaliation, there was a strong sentiment of conscientiousness.

Dr Sue Wareham from the Medical Association for the Prevention of War spoke of the many refugees coming as a consequence of war and was critical of Australia’s involvement in the conflicts from which they are fleeing.

Australia’s alliance with the US came into question and mention of involvement in the 2003 Iraq invasion resulted in an eruption from the crowd: “Shame.”

The loud voices then fell silent as Gumbayuggirr woman and poet, Elizabeth Jarrett, shared a verse written in solidarity and protest:

“For the reign of terror, for them it never stops

While our government supports the bombs that drop”

As Prime Minister Malcolm Turnbull was in Papua New Guinea, the government’s resettlement deal with the US was a point of contention, with the call to “bring them here” echoing throughout the crowd.

However, when Immigration Minister Peter Dutton was asked on Sunday what will happen to those detained on Manus Island should the US deal not play out, he said that detainees would not be coming to Australia.

“The advocates can bleat all they want, they can protest all they want. We have been very clear: those people are not going to settle in our country because that would restart the people trade,” he told Sky News.

Despite these comments, there was hope and certainty that we can all inform change and bring justice for refugees. If we want our government to adopt more humanitarian policies on our behalf, we need to stand together in solidarity and call for compassion.

The march proceeded through the city, past Martin Place and down Bridge Street, ending at Circular Quay.

Chants and drumbeats constantly accompanied the inspired protesters and their overarching message: “Say it loud, say it clear, refugees are welcome here.”

Share
Previous What On Earth Is Mark Latham Up To? Reflections On His New Podcast, “Outsiders”
Next A Race to Speak