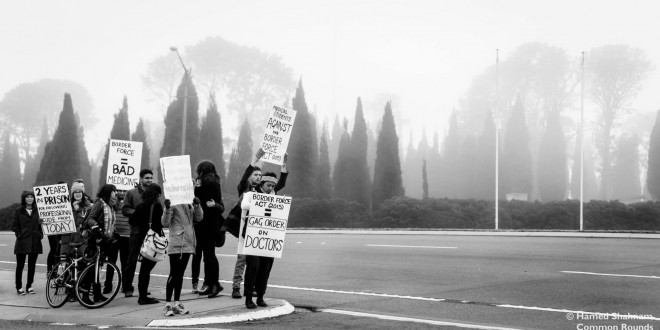 The Australian Border Force Act came into force on July 1 as the latest alarming demonstration of what “bipartisanship” looks like under the Shorten-led opposition. The act includes a series of “gag laws” that prevent staff working at detention centres from disclosing information about threats to the health and wellbeing of asylum seekers. In particular, they threaten employees with two years in jail for reporting something like child sexual abuse.

As a breed, doctors are generally apolitical in their professional life. Many doctors may hold strong political views and some doubtlessly have political affiliations, but the practice of medicine is and must be above politics if it is to deliver the best available care to those who need it. Activism from within the medical profession is thus rare, and most often in response to grave humanitarian concerns or conditions which prevent them from doing their job.

In the week since the Border Force Act came into force, the medical community has led the public protest against it. On July 1, the Guardian published an open letter authored by over 40 doctors, nurses, teachers, social workers and other detention centre staff challenging the government to prosecute them for advocating on the behalf of asylum seekers. They wrote it because they wanted to let everyone know that “this threat is not going to stop [them] speaking out “. On the same day, the Australian Medical Students’ Association called every single MP and senator to register their objection to the act on behalf of the country’s 17,000 medical students. Since then, the Australian Medical Association has publicly denounced the act, doctors from around the country have engaged in peaceful protests, and even a group of New Zealand doctors has written in condemnation of the laws.

The Border Force Act provides for the creation of the Australian Border Force led by ex-chief executive of the customs and border protection service, Roman Quaedvlieg. Both Quaedvlieg and immigration minister Peter Dutton have declared that claims that doctors who raise concerns about health conditions in detention centres could be prosecuted are inaccurate. However, there are serious conflicts in the law that have very real potential to imprison doctors for reporting dangerous health conditions and child abuse.

Section 42 of the act (reassuringly titled “Secrecy”) makes it an offence for an “entrusted person” to make a record of or disclose “protected information”, with a penalty of 2 years’ imprisonment. Section 46 specifically makes it an offence to disclose information about the “provision of services to persons who are not Australian citizens”, thus directly singling out asylum seekers.

There are a number of exceptions to the offence provided for in the act. In particular, section 48 states that protected information may be disclosed if it is “necessary to prevent or lessen serious threat to the life or health of an individual”. While this seems to give workers reasonable leeway to report concerns, other sections of the act provide express disincentives to do so. For example, section 26 of the act gives the Border Force commissioner the power to direct employees to provide information, answer specific questions and produce documents “on the ground that the information…might incriminate the person”. That is, employees may be directed to self-incriminate if their activity “is likely to affect the operational responsibilities or reputation of the Department.”

Intriguingly, the Border Force commissioner can also request workers to “make and describe an oath or affirmation”. The nature of these oaths and affirmations is left to the imagination but no doubt involves a lot of chanting, incense and many, many flags. Under section 24 workers are prohibited from engaging in conduct “not consistent” with said oath. Mysterious. Predictably, breaching any of these requirements may result in employees losing their jobs.

Both Dutton and the ALP insist that the act protects detention centre staff and contractors to disclose information under the Public Interest Disclosures Act. However, this act conveniently does not protect disclosure regarding an Australian government minister or policy. It only allows whistleblowers to disclose information to a non-government entity or the media if there is “substantial and imminent danger to the health or safety” of one or more persons. A doctor who reports unacceptable living conditions, threats to a child’s normal mental and physical development or mental health risks would therefore not necessarily be protected if they were not considered “imminent” dangers. Finally, the act precludes whistleblowers from disclosing “sensitive law enforcement information”, a term some lawyers have argued the government could apply to the entire process of detention.

In short, by dismissing the claims of doctors and lawyers and waving around the Public Interest Disclosures Act, both major parties are deliberately misleading us. At best, the Border Force Act prevents doctors from fulfilling their ethical and professional duties as medical practitioners. At worst, it could land them in jail for doing the job they were trained to do. The authors of the open letter aptly pointed out, “if we witness child abuse in Australia we are legally obliged to report it to child protection authorities. If we witness child abuse in detention centres, we can go to prison for attempting to advocate for them effectively”.

While the ALP is more than happy to be complicit in this messy business, a growing number of Australians refuse to be on the wrong side of history. And when doctors all over the country are actually daring the government to prosecute them to expose the horrific conditions asylum seekers – their patients – are subjected to, you better believe it’s for a good reason. As a medical student, they are the doctors I look up to because they are the doctors we are trained to be.

Ananya Chakravorty is a fourth year medical student at UNSW. While she is skeptical that she will ever graduate, she hopes that if she one day does, she too can make a difference.