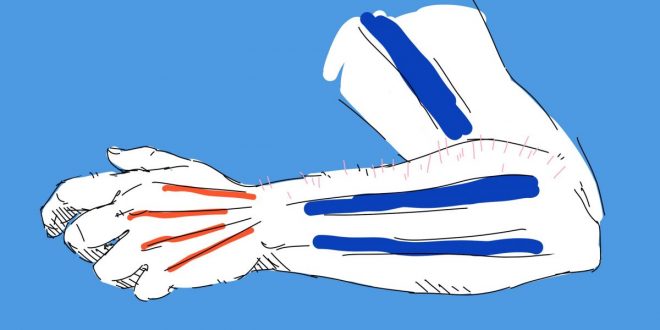 You extend your pinkie fingers first. A herculean task, but you manage it fine, and decide to toy with the idea of freeing the rest in succession. They were clenched into fists for so long that your joints are stiff, and each movement makes you far too aware of the sensation of bone scraping against bone, although it’s hard to tell which parts you’re imagining. Your mind projects a creaking sound as each joint, one after the other, locks into its final position. This is probably better than whatever sound they would make if you were ever able to hear it, you think. You’d much rather that your body was a well-oiled machine, as people like to joke, rather than this mass of meat, string, and bone that you are wholly unsatisfied with. You stare at your now-open palms, trying to pinpoint every vein that’s forced you to stay alive through this. You wonder how they’d look with the skin peeled back.

You feel like you have taken a beating, but where from? Who from? Are there bruises on your skin or is your ego so inflated that it’s become alive in its own sense? This feels too real to be an illusion, a magic eye picture stretched across your skin. Maybe you were wrong. The beating comes from the inside. The body, whole with the fragmented head, is a slave to the mind. A poorly played puppet in the performance of life.

Today feels oddly good. Is it reasonable to call it normal? A day that is normal for most isn’t normal for you. But who gets to decide whether “normal” is relative or not, anyway? Maybe you do. You feel like you could accomplish anything today, but the freedom of motivation and energy is starting to feel crippling. Having so much choice has become foreign to you, and your decision-making muscles are so underworked that you feel the opportunities slipping away. The paralysis doesn’t leave you until you are already well into the night and so exhausted from disappointment that your body asks to be paralysed in a different way; sleep. It arrives somewhat easily but the feeling you get as you sink into slumber feels much too similar to that of guilt.

The clock is constantly ticking. This shouldn’t be a surprise to you, but somehow it always is. The passage of time both eludes you and manifests itself as a constant worry. It makes sense, right? To fear something so constant and unavoidable, something so far out of your control. Always running out. You just need more. If only you had more. What would you even do with more? Waste it, probably.

Microscopic waves rush along your limbs, their energies colliding in a well that makes your sternum ache with its weight. Each wave leaves a trace, as skin changes texture from smooth to rough and becomes alive with scattered sensation. A cascade of hairs standing on end, like a constant wind has suddenly stopped, having received the message that something is deeply wrong. Your skin cells agitate in succession. Unsettled, bracing for attack, as they are unable to move in toward the safety and warmth of the body. A fragile armour is forced into being. To protect against… what?

Your quick breaths whistle out through gritted teeth. Your blood boils but the air being pulled and pushed out of you is an icy rapid that collects no heat to cool your head. All you want is some sense of control. You try to slow your breathing; you make yourself choke. An immense weight is crushing from all sides, enveloping and constricting you. It becomes harder to stand as your light-headedness drags you to the floor. You curl your body into a tight ball and bury your head in the middle. You block out the world and attempt to regress far into your mind, past any coherent thought and emotion to find the centre, the most innermost of inner peace. It becomes darker and darker, fading from quiet to silent. The only sensation you register is that of your burning clenched fists. They are your connection to the outside world, a recognition of reality, so that you don’t get lost.

Share
Previous Locked Down, Locked Out, What Now?
Next Processing Grief Through a Zoom Screen