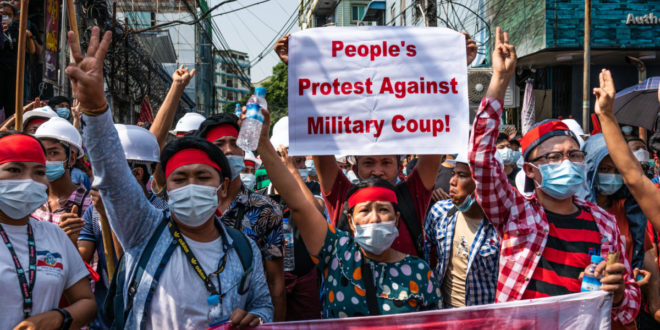 Eight months ago, a group of power-hungry tyrants staged a military coup in Myanmar, throwing out a democratically elected government. Unbeknownst to much of the world, Myanmar has once again returned to its dark days despite widespread and constant condemnation of the authoritarian government for over five decades.

Myanmar (Burma), nicknamed “The Golden Land” due to the abundance of golden pagodas across the country, is the place I call home.

I have spent the last 10 years of my life overseas. During that time, several people who have visited Myanmar tell me that the Burmese people are extremely kind and friendly. While I hold a biased perspective, this is something that I take pride in as a fellow Burmese.

However, little is known to the world about the hardships and struggles that are hidden behind those smiling faces.

Following independence from the British Empire in 1948, Myanmar became a short-lived democracy led by General Aung San and the Burmese Independence Army, until it was put under military dictatorship in 1962.

I grew up under this military regime.

I did not understand what it meant to live under the regime because I was too young to understand the complexities of politics, and face the harsh reality that my home country was in fact one of the most isolated countries in the world.

My misperception of the state of my country quickly changed when I became more aware of what extended beyond my immediate surroundings. I remember feeling puzzled when I realised that Aung San Suu Kyi, a Noble Peace Prize laureate, was kept behind a heavily gated house with armed guards in Yangon – gates we had driven past many times. What made me particularly confused was that the lady behind those gates is the only daughter of General Aung San, our celebrated independence hero.

She had been put under house arrest by the Tatmadaw (the Myanmar armed forces), which was founded under General Aung San’s Burmese Independence Army. Strangely, her crime was leading and helping fight for democracy in 1988.

I learned more about the 8888 uprising, in which thousands were killed by the Tatmadaw while protesting their persistent refusal to give up power, despite international pressure and the Tatmadaw’s heinous crimes against the ethnic minority groups in the country.

The aforementioned horrors were not covered in the ‘news’ propagated by the few accessible TV channels. Many of us were only made aware of this reality by illegally listening to the Voice of America Burmese radio channel, or through word of mouth.

I began to realise that I was living in a country where our phone calls were tapped, and our every movement observed. The harsh reality sunk in when I witnessed the 2007 Saffron Revolution, in which the Tatmadaw shot pro-democracy protestors, some of whom were peaceful Buddhist monks.

Fast forward to 2011, Myanmar went through a process of political reform. The military junta dissolved and was replaced by a new military-backed civilian government. Aung San Suu Kyi was freed from house arrest and the democratization processes were underway. Perhaps the most momentous event in the process was the 2015 general election, when Ms. Suu Kyi’s National League for Democracy (NLD) won the majority of parliamentary seats.

The once-isolated Myanmar started to open, and for the first time in over five decades, we were led by a democratically elected government. However, the dreams and hopes of all Burmese citizens were once again shattered when the Tatmadaw staged a coup d’état on 1 February 2021.

Without any evidence, the Tatmadaw made claims of election fraud against the NLD’s 2020 general election victory – despite the fact that it was a landslide victory in which the NLD secured over 80% of the parliamentary seats.

Nation-wide civil disobedience movements (CDM), labour strikes, and campaigns including the pot-banging campaign, and the military boycott campaign were carried out throughout the country. The three-finger salute quickly became the symbol of the protests which demand that the 2020 election results be recognised.

As the pro-democracy movements grew, the military’s brutality escalated. As of 27 October 2021, a total of 1218 people have reportedly been killed while 9281 people have been arrested, charged, or sentenced. Another 1954 are charged with an arrest warrant and are currently in hiding, according to AAPP (Assistance Association for Political Prisoners).

Of those who have been brutally murdered by the military junta, the youngest victim was just 6 years old.

Those who have been charged or sentenced by the military junta range from politicians, celebrities, poets, writers, students, doctors, to journalists, as well as an Australian citizen.

The Tatmadaw continue their systematic brutal attacks and commit crimes against the Burmese people ranging from shooting civilians, raping women, abducting people, torturing those captured, killing children, bomb raiding villages, to burning homes. Unfortunately, the number of the victims to these heinous crimes continue to increase daily. Countless parents have been told to pick up the organ-less bodies of their children, whom the military illegally abducted and tortured for taking part in peaceful pro-democracy movements.

More than ever, we need attention from the world. Like many Burmese citizens living overseas, it has been extremely distressing for me to see what has been taking place where our immediate families reside and witness the futures and lives of innocent people being destroyed by a group of power-hungry tyrants. However, the voices of the Burmese people continue to roar despite their lives being constantly threatened by the military junta.

The Revolution Shall Prevail! အရေးတော်ပုံအောင်ရမည်!

Editor’s note: the author of this piece has decided to remain anonymous as they have family in Myanmar who may be negatively affected by the publication of their name.

Share
Previous What is the UNSW Academic Board and does it matter?
Next UNSW announces return to in-person classes for Term One