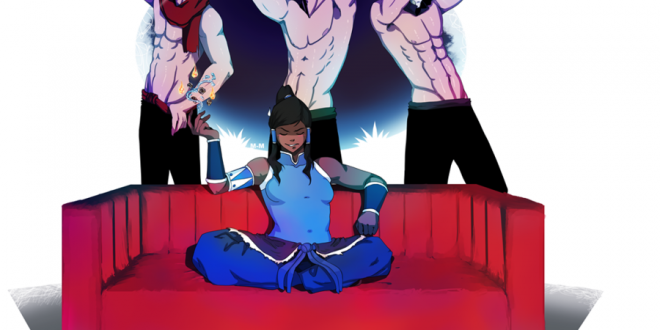 When homo-homegirl Korra grabbed Asami’s hand and walked into the spirit portal to have some off camera (off pen? It was animated, there was no camera) Sapphic O-times at the end of the final season of The Legend of Korra; tumblr, reddit, and facebook went into meltdown as the Queer side of the internet verbalized, in unison, YAAAS QUEEEEN. It was the first overt confirmation in an animated kids show (and I use kids lightly, because LOK was dark as shit!) that people aren’t just straight. It was a milestone that was the result of two seasons’ worth of foreshadowing and several gigabytes of phantasmagorical slashfic.

It’s actually no secret, that the world is everyone’s favourite PC word: Heteronormative. All the way down to kids television. Heteronormativity is the reason Bert and Ernie haven’t gotten married yet, it’s the reason Xena and Gabrielle only ever looked REALLY intensely at each other, it’s the reason Mulan isn’t really about the power of drag; it’s the reason why Korrasami was such a big deal. The word “representation” gets thrown around a lot, usually coupled with “important” and more frequently “soooo important”. There’s often a misunderstanding as to why people are so moved by it; that it’s some sort of validation of identity. Korra being bisexual didn’t validate any bisexual’s bisex: I personally can confirm, bisex has been happening without Korra for some time now. It’s more so the acknowledgement that is so vehemently and vocally appreciated, the acknowledgement that, yeah the zeitgeist is catching on, and the Avatar is Queer (YOU GOTTA DEAL WITH IT. Couldn’t resist. For the non-fans, that was a quote).

I was recently told that queer characters are in abundance now, and that the need for representation isn’t what it once was, fuck, I’m pretty sure the entire cast of Glee eventually became some kind of not-straight by the end of it. But when tasked with counting the number of queer characters in TV and movies that weren’t tokenized stereotypes and devices, many fingers were left unused to keep tally. Stanely Tucci (bless him) seems to have become the go-to sassy gay mentor in everything and took up the bulk of the count.

Netflix seems to have become the champion of representation game, with Orange is the New Black and Sense8’s internet GIF count alone put the streaming service at the top of the representation meritocracy. Sense8 specifically stands out in its treatment of Trans characters, a move most of the ‘progressive’ networks still have yet to play; where Nomi, the character in question, has regular things to deal with that don’t revolve around her being trans (those regular things being taking down an evil corporation tracking mentally linked people using her boss-ass-bish hacking skills; study software engineering kids) a feat most shows never even try to attempt in the rare chance they somehow include a Trans character, because all Trans people do is deal with being Trans. People are who they are, not what they are.

Korra now needing shorter nails not being ‘addressed’ was even better than what many shows have done before: she’s still the same Korra, master of all the elements/baes. She’s still the same kick-ass stubborn southern water tribe Avatar we endured season 2 with. Her being with Asami was a non-event, her bisexuality wasn’t trivialized or pathologized: it just was, and that’s what representation should be.

Yeah, we’re here, we’re queer, you’ve gotten used to it. Can we move on now please?