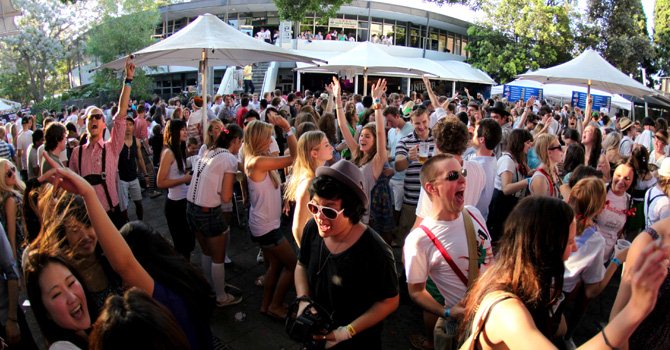 Partygoers rock on at a past Oktoberfest. (Source: Arc @ UNSW)

The festival, originally slated to return on October 15 this year, has hit a roadblock after the 2014 venue, Hordern Pavilion, backed out of hosting Oktoberfest earlier this week, leaving Arc in the lurch several months out from the event.

The cancellation occurred after NSW Police contacted Hordern Pavilion with concerns regarding Oktoberfest and the likely presence of thousands of intoxicated young people at the event.

Tharunka understands that, while Arc is looking into the possibly of alternative venues, the prospect of finding an appropriate and amenable venue is slim, marking the second year running that Arc will be unable to host the popular festival.

Oktoberfest was first cancelled by Arc in 2013, with the organisation citing anti-social behaviour resulting from drinking that took place at the Village Green at the 2012 Oktoberfest. A number of complaints and security incidents in 2012 led to the festival’s organisers cancelling the event last year due to safety and welfare concerns.

More details will be provided as they emerge.

Previous What we could buy instead of shiny new jets
Next UNSW appoints next Vice-Chancellor, Ian Jacobs