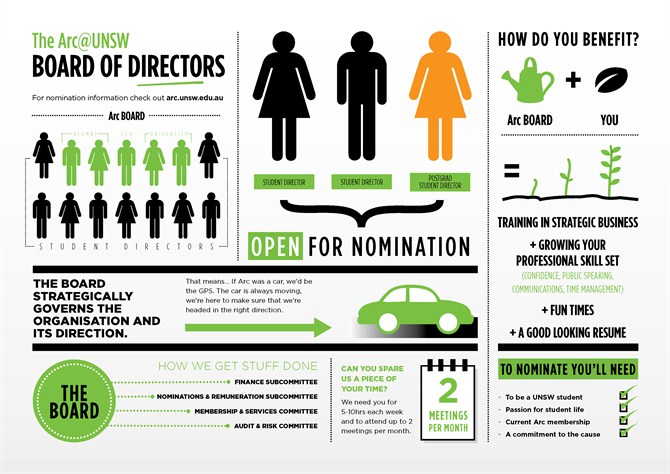 Arc Board moves to get women on board As Board nominations close this week, Arc’s Board and management will be watching closely to see whether their decision to support a marketing strategy over a quota will successfully encourage women to nominate.

In March last year, Tharunka reported that attempts to implement affirmative action policies had stalled, despite strong support from both the Board, and amongst the SRC and women’s activists. At the time, just three of the fourteen Board members were women; this year, there are five.

In documents provided by Arc, it is clear that many approaches for improving female nomination rates were considered by the Board. These included quota models or the introduction of a female directorship (similar to the COFA and Postgraduate Director positions), as well as the softer ‘cultural approaches’ eventually adopted in late 2013.

Arc Chair, Chris Mann, told Tharunka that just prior to the 2013 Board nominations, a special resolution was circulated, proposing that either one of the three elected student director positions was female (including the COFA and Postgraduate positions), or that one of one of the ordinary directory roles went to a woman, irrespective of what gender the COFA and Postgraduate directors were. The marketing strategy was included in the special resolution; however, it was recommended to occur regardless of whether a quota was instituted.

“The board could not reach an agreement on the special resolution; the reason was that the Board had concerns with the process of the policy, not the overall principle value of equal employment opportunity,” Mr Mann said.

The multi-year marketing strategy will include posters, video, and online and print advertising in Tharunka and Blitz, with a key focus of the campaign being featuring women in the visual advertising. While designed to appeal to all students regardless of gender, Arc management believes this will address the possibility  that women are self-selecting themselves out of the nominations process.

After the 2014 Board elections, the strategy will also include courses, information sessions, and forums, which feature women leaders.

Though advertisements appeared on the Arc website and in the student publications, posters have been few and far between, and the video component of the strategy is not expected to be circulated until after nominations have already opened. This has prompted some to question the capacity of the strategy to be successful in its aims.

UNSW SRC Women’s Officer, Olga Lisinska, a supporter of a quota model, said, “If the marketing strategy is not being used to its fullest capacity, then it won’t actually result in any change.”

Similarly, Board sources suggest that although it will not be implemented until the middle of 2014, the motion to run the forums and mentoring programs was passed before the 2013 Board elections. By the time its effect can be seen in nominations, two Board cycles will have passed. Ms Lisinska said that while she recognises that policies not fundamental to Arc’s operations may take time to put into action, sluggish rollouts “make it appear as though it’s not a priority for the Board”.

The faster quota approach is one favoured by the UNSW SRC President, Joel Wilson. While he supports a communications campaign as a component of cultural change, he believes affirmative action quotas are the key to making that cultural change happen sooner.

“We should be fostering leaders, and in particular female leaders, and making sure that they have the capability and training to confidently apply for and take on roles which have been traditionally occupied by men”, he said.

“[Affirmative action quotas] are a mechanism of getting that cultural change, and really fast-tracking it, because you’ve got women in leadership positions fostering other women leaders.”

The Vice President of UNSW’s Conservative Club, Anneliese Oldcastle, disagrees, saying that rather than causing positive cultural change, quotas “ultimately encourage negative stereotypes against women in university or business, such as ‘she only has the position because she is female’.”

“University women shouldn’t be reduced to mere quota pawns. We are just as capable as male students, and I resist anything that promotes that perception that we need a stepping stool and lack the qualities to reach the top by ourselves,” she said.

Both Ms Oldcastle’s suggestion of negative stereotyping, and Mr Wilson’s belief in catalytic social change have been evident within the University of Sydney Union (USU) Board since it enacted affirmative action quotas in 2006. Their model ensures that at least 5 of the 11 ordinary directors are women.

In the first year of the new rules’ operation, only three women successfully nominated, and were appointed without election, with criticism from themselves and others that their positions were not meritoriously earned.

Last year, it was a different story. USU President Hannah Morris says that since the introduction of affirmative action, there has been such a significant trend for female participation, the quota rules do not necessarily come into effect.

“In 2013, there were fifteen candidates who participated in the Board Elections, six of them female, with a female topping the polls, and three female candidates getting elected out of a possible six positions, which meant the affirmative action provisions weren’t enacted,” she said. This is apparently only the fifth time a woman has topped the polls in the USU’s 42 year history.

This success has not occurred without challenging side effects. The extensive affirmative action review undertaken by the USU suggested that the “affirmative action policy has become subverted and manipulated as a strategic tool by existing first year Board Directors when deciding which candidates to run”. It also quotes former female Board members, who said that they didn’t vote for themselves, or that their friends campaigned for male candidates, because of the expectation of affirmative action provisions.

The problems surrounding affirmative action were well summarised in the review by 2005 USU Vice President Lauren Hendry Parsons – “AA is a blunt instrument… it’s hardly a scalpel. Although practically and statistically this policy achieves its aims (more women running for Board, more female representation on Board), it also fundamentally reinforces troubling ideologies concerning a woman’s inherent legitimacy and worth as a candidate and Board director.”

While affirmative action quotas or marketing strategy might solve the under-nomination of women for ordinary directorships, this is not the only structural problem keeping women underrepresented on Board. Each year, three (21%) of Board positions are allocated to ex-officio members – the SRC and PGC Presidents, and the SDC Convener. This year, all three positions are held by men. Last year, all three positions were held by men. In the four years since the founding of the PGC, there have been twelve ex-officio places, and only one of those was held by a woman – Scarlett Ha back in 2011. Similar patterns exist within College student leadership structures, and within the Student Leaders Group.

Mr Mann says that while “the Board cannot control who is elected there, nor can it implement an [equal employment opportunity] policy for the ex-officios”, they will continue looking at ways to encourage more diversity in leadership positions, and not just with respect to gender, but to other underrepresented groups, such as international students.