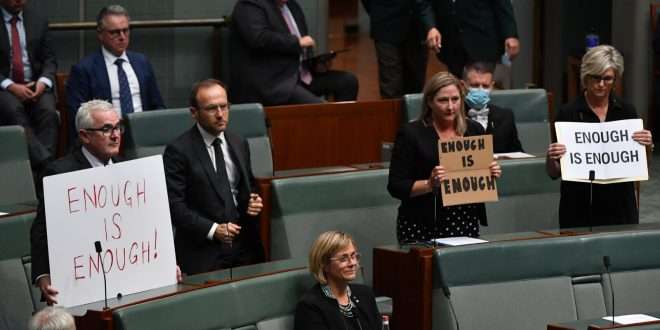 Women have been in the Australian Federal Parliament for 80 years. In this time, the culture of Parliament has changed but has it caught up with modern workplace culture standards?

In 1943, the first Australian women were elected to Parliament. Dame Enid Lyons was elected to the House of Representatives (the lower house) and Dame Dorothy Tangney to the Senate (the upper house). Despite 80 years having passed since their election, the culture within Parliament is shameful compared to modern day standards.

“This is Parliament. It should set the standard for workplace culture, not the floor of what culture should be,” an interviewee from the Set the Standard Report, said.

The Set the Standard report, more commonly known as the Jenkins Report, was a collation of eight months of work by the Australian Human Rights Commission (AHRC). The report, written by AHRC Commissioner Kate Jenkins, found that 51% of all employees currently working in a Commonwealth Parliamentary Workplace had experienced at least one act of bullying, sexual harassment or actual or attempted sexual assault.

Although the number of women in Parliament has since increased since 1943, clearly the culture still condones a toxic culture that indulges heteronormative white men.

This toxic boy’s club culture is encouraged by some men in our nation’s highest office – such as Prime Minister Scott Morrison – and is perpetuated by those who stand by. In 2017, Minister for Education, Minister Alan Tudge, was accused of abuse by his former staffer Rachelle Miller during their consensual extra-marital affair. The Coalition was adamant that the reason an estimated half a million dollar payout of taxpayer money was paid out to Miller should be kept ‘confidential’. Minister Tudge continues to deny the allegations; he has since been invited back into the cabinet by Morrison.

This brand of toxic masculinity can also be seen in the lower house parliamentary sessions, which often sound like a schoolyard where the strongest voice wins. The manner in which the federal parliamentary sessions are conducted would be completely unacceptable in most other workplaces, as seen in this session of question time.

Parliamentary culture is not changing because there has been such little meaningful action. But what could parliamentarians do to improve this? The lack of diversity in parliament breeds a culture of toxic masculinity, which some parties have attempted to combat by introducing quotas throughout the years.

The Liberal-National Coalition has not implemented gender quotas. Instead, the party has a target of 50% women in Parliament by 2025, using grassroots recruiting to increase participation. In 2019, Prime Minister Morrison commented on possible quotas in the Coalition:

The Liberal party is currently made up of 30.4% women parliamentarians, with allegations of a ‘boys club’, a recurring theme of the Liberal-Nationals Coalition.

The Jenkins report says the current culture of Parliament comes down to a few factors; “A lack of clear standards of conduct, limited accountability and power imbalances, combined with the high-intensity, high stakes nature of the work, the pursuit of political power and advantage, the frequent blurring of personal and professional life and the intense loyalty to political parties create specific risk factors unique to this workplace”.

It seems that the lack of accountability and clear channels for complaints in Parliament allow for a culture that is stuck in the 1980s. For the workplace culture to change, meaningful action will have to be taken, such as following the clearly laid-out suggestions in the Jenkins report. With the federal election quickly approaching, we will soon see if this workplace culture will be changed under new leadership or if it will be swept under the rug until the next election.