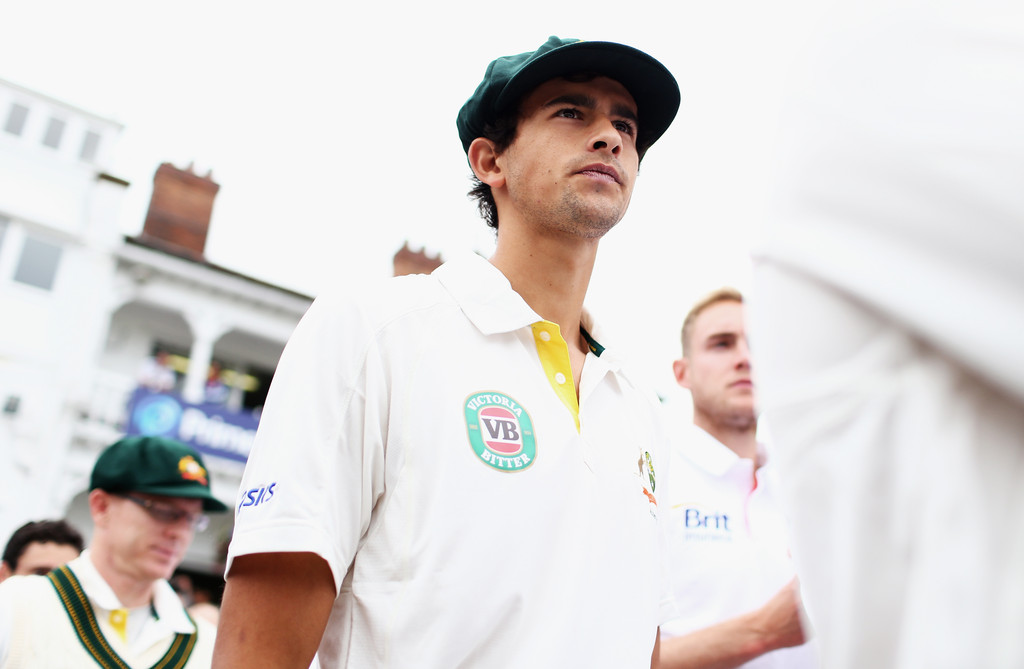 If the Ashes were fought on the basis of winning smiles, Australia would surely have found its newest superstar.

As a familiar script began playing itself out on the second morning of the First Ashes Test at Trent Bridge, few could have predicted the three magical hours — and yes, smiles — that would follow.

Australia, stripped of its much-vaunted stars through the Waugh and Ponting eras, began the latest of many capitulations to a disciplined English bowling attack, finding themselves in the unenviable position of 9–117 in less time than it takes Shane Warne to write a discomfiting tweet.

Out came the Australian number 11, a 19-year-old debutant few had known the name of before his improbable surprise addition to the Test team. Indeed, Sky Sports’ coterie of ex-English captain commentators went to ever-increasing lengths to chuckle over just how little they knew of this boy parachuted into the Australian team.

98 runs, 101 balls, and several batting records later, it was difficult to find anyone at the ground without the name Ashton Agar on their lips.

Trent Bridge, once described by Neville Cardus as a “lotus land for batsmen where it’s always afternoon”, had come good for Ashton Agar on a dry, low wicket quietly called in from the Pitch Doctors. A star was born, and though he may not have realised it in that moment, Ashton Agar’s life had embarked down a road less travelled, from which he will likely never return. Already embraced by the nation as the next wunderkind of Australian cricket (was it not so long ago that then-19-year-old Pat Cummins occupied the same place in the public imagination?), Agar displays tremendous promise, bowling with excellent control, some turn, and good variation. His swashbuckling batting style — modelled on his 16-year-old brother — speaks for itself, and brings with it the tantalising possibility of one day likening Agar to Garfield Sobers; that is, if Cricket Australia’s automaton media department has anything to do with it.

Still young, and described five times in one sentence by Justin Langer as “loose”, Ashton Agar will only get better at his game. One expects him to reach the peak of his tradecraft in a decade — if he survives until then. As the 13th Australian Test spinner since Shane Warne’s retirement in 2007, the best thing Agar could have done for himself on debut was succeed as he did in a storied innings with the bat, firmly entrenching himself into the hearts and minds of Australians (the ones with insomnia, at least) and making it that much more difficult for selectors to entertain the notion of dropping him.

Not that they would be likely to, either. With his youth, easy good looks, tag of smiling assassin, and Sri Lankan heritage allaying Cricket Australia’s silent panic over the overwhelming whiteness of the national team, Ashton Agar is practically the new Pat Cummins. The CEO of Cricket Australia, James Sutherland, is said to have needed a cold shower after learning of Agar’s existence in all its glorious marketability.

Make no mistake, Agar has plenty to learn — and so he will as most spin bowlers do with maturity. But his two wickets for the match were only two shy of Graeme Swann’s, that too whilst being unluckily denied Broad’s wicket in the second innings where Agar nonetheless produced an economy rate of 2.34 runs per over. Meanwhile, his batting heroics fit seamlessly into a team that, much like England only a decade ago, will need to bat all the way down until genuine top order talent emerges.

And indeed, it was Australia’s batting frailty in isolation that threatened to undercut the achievements painstakingly wrought by our bowlers — once as a disciplined unit bowling tight lines and lengths to put the squeeze on England’s batsmen, and once as tailenders completing the thankless task of accumulating over half of Australia’s total runs over the course of the match.

While Ashton Agar’s (98) and Phil Hughes’ (81*) record-breaking tenth wicket stand of 163 in the first innings may have contributed to the legend of this Test in Ashes folklore, it belied the Lilliputian efforts of the top six batsmen, who between them managed only three half-centuries in the entire match.

This structural batting weakness remains Australia’s biggest Achilles’ heel to Test match victories, a fissure which cannot be papered over by endless extraordinary tenth wicket partnerships. In the six-and-a-half years following the 2006/07 Ashes series which saw a spate of high profile retirements, Australia has been dismissed for less than 300 runs in 45 out of 86 innings in which the team has been bowled out — or 52% of innings.

Our current batting line-up represents perhaps the nadir of Australian batting since the early 1980s, with a consistency suspiciously approaching that of the sawdust in war-time bread. Steve Smith, for all his confidence and remarkable ability to catch the eye of selectors with his bleached plumage, is not a Test number five. Compared to previous occupiers of the position in Michael Clarke and Steve Waugh, an obvious discrepancy emerges. The same applies for Ed Cowan at number three.

Of the batsmen, only Phil Hughes and Brad Haddin may take some consolation from the First Test, the former confronting his demons to splendid effect in the first innings, and the latter finally proving his mettle as a leader of a young, rebuilding side. Haddin’s fighting 71 in the second innings, bringing Australia within 14 runs of victory, singlehandedly lifted the spirits of a nation and dressing room with him. Because — make no mistake — had Australia been bundled out well away from their fourth innings target of 311 runs, it could well have been the proverbial pin in a helium balloon.

Haddin, Hughes, Agar and James Pattinson’s antics, however, have given renewed cause for hope. It seems, for now at least, that the strategy of recalling Haddin to the Test side following the ‘experience’ vacuum left by the departure of Mike Hussey and an indolent Shane Watson unable to complete his homework, has paid off.

Haddin joins Michael Clarke, who has for two years admirably taken on the role of a default Allan Border, providing the backbone around which the remainder of his team may build their innings — though Australia’s reliance on his batting feats grows more concerning by the day, as does England’s reliance on James Anderson’s bowling.

In the 2006/07 Ashes 5–0 Aussie clean sweep, Jimmy Anderson, a fresh-faced Northern youngster with frosted tips, collected a return of 5 wickets for 82 runs a piece in the three Tests he played.

How times have changed.

Attendees and viewers of the First Test were treated to another Jimmy Anderson special, with the pace spearhead collecting ten wickets for the match and single-handedly driving the English team bus to victory with a Man of the Match performance. Between them, Steve Finn and Stuart Broad bowled less overs than Anderson’s 56 overs, a gargantuan effort which will surely leave him on the brink of collapse should he attempt it again in four days’ time at Lord’s.

While the First Test was always more important for the Aussies given the outright victory across five Tests required to reclaim the urn, the series moves onto the home of cricket at Lord’s next. Before 2009, the last time Australia had lost a Test match at Lord’s was in 1934.

In the aftermath of Trent Bridge, there lies hope for a competitive Australian performance in the coming four matches. Indeed, Ian Botham, who had previously predicted an English 10-0 sweep before the start of the series, sagely noted on Day Four at Nottingham that one should “never write the Aussies off”. For this match, at least, the Aussies can be proud of their effort in producing five of the most tense, hard fought, if somewhat imperfect, days of cricket the Ashes has seen in recent years.

Immediately after holing out to Graeme Swann in the outfield on 98 runs, Ashton Agar made his way over to the stand where his family waited. Flashing an easy grin at his brothers, he shrugged and said of his dismissal, “sorry about that”, laughing all the way back to the field.

It was as if the magnitude of an Ashes ton on debut as a nineteen year old number eleven  off-spinner didn’t weigh on his shoulders at all, and for a day, cricketing fans of all countries were able to share in the joie de vivre of this remarkable young man, for whom the moment didn’t matter, only the occasion did.

Enmities and 130-year-old sporting rivalries were swapped for a collective appreciation of everything that makes Test cricket as great as it is, and for an appreciation of having just witnessed history take place — with a smile on his face.

If he were ten years older and in the same position, it’s difficult to imagine a batsman having the same response to such a dismissal. But as it was, Ashton Agar, neatly situated at the centre of a Test cricket fairy tale, appreciated his stunning achievement for what it was and walked off with hardly a care in the world.

Similarly, the performance of the Australian team in the First Test has given cause only for a well-meaning “sorry about that”, easy smile, and reassurance that “we’ll try again next time”. Far from the spiritless shells of players England bade goodbye to in the wake of the disastrous 2010/11 Ashes series, these Australians have given a hard-fought demonstration upon which the team will need to build.

And in an indication of the changes afoot in the rebirth of the Australian cricket team from its glory days throughout the 1990s and 2000s, the cyclical nature of sport raised its head once again this Test match. Already, a group of Aussie supporters has taken to waiting outside the team bus chanting “Ooh, Aah, Agar” to the wry smiles of the country’s newest cricketing star — a riff on the “Ooh, Aah, Glenn McGrath” chant which once followed McGrath around the globe.

And as the series shifts to Lord’s, Glenn McGrath’s favoured hunting ground where he secured 26 wickets at 11.50 in his three visits there, one can hope for this homage to serve as a changing of the guard. Perhaps a few years from now, Agar will bowl Australia to victory in front of packed crowds to the sound of “Ooh, Aah, Agar” as McGrath commentates from the sidelines.

But for now, a steady development curve and good showing in the remaining Tests is enough to expect, with the promise of more to come. Already a superstar among the late night fanatics, Agar will face the full brunt of Australian media and public attention later this year when the Ashes come Down Under.

And it’s difficult to imagine him treating this fact with anything other than a megawatt smile.

Previous Size Matters: new study reveals the truth about penis satisfaction
Next 7 Reasons Why Being Single Is Awesome