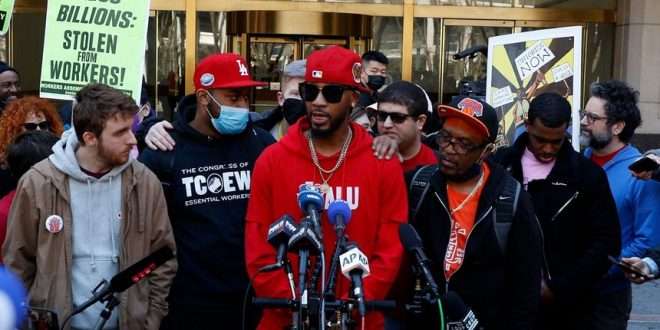 Young Australians are less likely to be part of a union, but willing to attend a protest or boycott a company. The Amazon union victory in the U.S could inspire the next generation of Australians to see unions as a force for political change.

“The revolution is here”

On the 1st of April, workers at a warehouse in Staten Island voted to form the first ever Amazon union in the United States. This victory was hard-fought, taking place in an oppressive workplace where workers are constantly monitored and talk of unionising can lead to warnings or even termination. In fact, Amazon spent $4.3 million on preventing the formation of unions in 2021 alone. For many, Amazon is the perfect symbol of the modern multinational corporation. A company as powerful and influential as some members of the United Nations.

Yet, it was only a small, independent group of workers with limited resources that created the first U.S Amazon union. Chris Smalls, ALU’s founder, is now the name reverberating through the proverbial halls of the wider labour movement. Smalls was fired in 2020 when he organised workers to protest unsafe conditions. It was later revealed that the executives at Amazon wanted to start a smear campaign on Smalls with one even labelling him as “not smart or articulate”. This is when the later president of the ALU first vowed to make Amazon “eat those words”, and he has more than fulfilled that vow.

Chris Smalls represents a new generation of labour activists. Both millennials and Gen Z have grown up amid a sharp decline of trade unions, coupled with greater encroachments on the right to strike and protest by conservative governments. Now in Australia and the wider world, it is becoming clear that younger generations want to see real political change. We are a generation that is more disillusioned with the electoral system and yet, are more likely to attend a protest or boycott a company.

When asked what unions can do for young people and students, UNSW education activist Anna Ho said:

“Students aren’t necessarily workers, but we do have learning conditions to fight for. When a mass number of students participate in their student union and are organised, we can mobilize effectively against attacks on our educations”

Outside of student unions, young Australians are also much less likely to be a member of a union. There are other reasons for this, such as casualisation, anti-protest laws (like the one Perrottet’s government just passed), and successive conservative governments. But the Australian union movement cannot only blame these external forces and must also look within.

The question that every Australian union is asking is, ‘How do we bring in more young Australians?’

Young Australians are more likely to encounter unions early in their working lives through wholesale and retail jobs. Unions like the Shop, Distributive and Allied Employees Union of Australia (SDA) which cover these jobs, have larger youth membership than most other unions.

Most young Australians are not opposed to joining unions. Instead, they are unsure about what unions do or the benefits they can receive. One survey found that 75% of secondary school students had no opinion on whether workers would be better off in a union.

In response to these findings, the union movement needs to reassert its value as a force of political change to younger generations. It appears that some unions are beginning to do so already. Since the beginning of 2022, NSW unions such as the Health Services Union and the NSW Nurses and Midwives’ Association have begun high-profile industrial action against the 2.5% pay rise cap in their award.

Anna Ho responded to this trend, saying that “An overwhelming 96% of the NTEU (National Tertiary Education Union) branch of the University of Sydney voted to take industrial action. It’s in this context that students are protesting tomorrow at the Sydney Free Education Protest – Staff and Students United.”

While youth membership of unions remains low, activism such as the education protest happening on the 13th of April demonstrate that students and young Australians are interested in real political change.

Finally, to answer the question of why young workers should join their union, Anna provided a more local example of what this movement can do:

“In 2020, workers at the Better Read Than Dead bookshop in Newtown unionised, took industrial action against, and voted to accept better working conditions, including improved conversion rights for casual workers, and improved domestic violence leave and parental leave. Many of the workers at BRTD who unionised were students”.