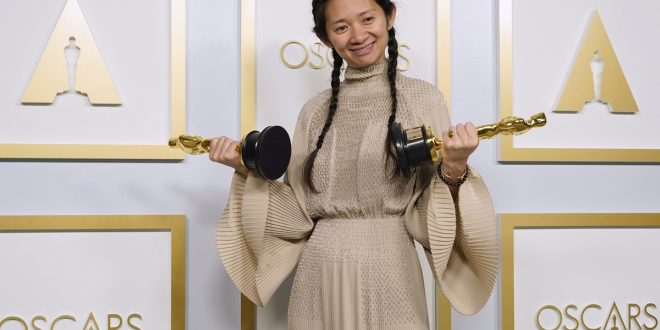 Chinese Director/Producer Chloe Zhao, winner of the award for Picture and Director for "Nomadland," poses in the press room at the Oscars on April 25, 2021, at Union Station in Los Angeles. (Photo by Chris Pizzello / POOL / AFP)

A review of Nomadland and Hi Mom! as their filmmakers sweep the 2021 awards season.

In a year punctuated by hits to film revenue across the board, Chinese comedian Jia Ling’s Hi Mom! is an outlier that managed the impossible. It broke the world record for highest grossing film by a single female director and made over $1 billion Australian dollars in the process.

This feat is even more sensational because it was Jia’s first time directing, writing and playing the lead actress for a feature film. The story is based on her 2016 sketch comedy titled ‘Ni hao, Li Huanying, a reference to her mother’s name.

Hi Mom! is a wholly original take on a simple question; ‘If you could choose not to be born to give your mother the chance at life-long happiness, would you do it?’ The cliché of a time-travelling protagonist trying to rewrite their life has been done many times over. But Ling’s story is underpinned by the loss of her own mother in 2001. She intersperses comedy and heart-wrenching drama in equal measure. By gently coaxing out an intimate relationship between mother and daughter, Ling illuminates their moments of joy together before time is inevitably up.

In a global pandemic that has made people painfully aware of the importance of family and relationships, it is unsurprising that films centring stories of vulnerability have enticed cinemagoers.

Language: In Mandarin with English subtitles

Verdict: Hi Mom! is a personal reckoning with the loss of a mother, shaped by heartfelt memories and brilliant comedic timing.

Winner of Best Picture at the Golden Globes this year, Chloe Zhao’s Nomadland is an ode to the American West. It is also one woman’s profound take on the way that friendship is not beholden to any one time or place, but can be returned to, like a home. Similar to Hi Mom!, the film is part of an increasing number that pass the Bechdel test, a measure of the way in which women are represented as three-dimensional characters onscreen.i

Incredibly, Nomadland is only Chloe Zhao’s third feature film. Yet, she is the first woman to be nominated across four categories at the Oscar’s, including Best Picture, Best Director, Best Screenplay and Best Editor.ii Female directors, who make up only 13% of the staff of top-grossing films, have historically struggled to have their stories funded by big production companies and win awards for behind-the-screen roles.iii

Powerhouses like Jia and Zhao are smashing the prevalent myth that women-driven films represent a greater fiscal risk to the industry.iv Zhao has been slated to direct The Eternals, a Marvel film that will be released in November 2021. It has been allotted a budget of AUD$258 million, a 40-fold increase on the budget of Nomadland.

Perhaps this is the beginning of a wider trend. As production companies slowly capitalise on the talents of many up-and-coming directors like Taika Waititi and Lu Yang, audiences are responding in kind. In a post-COVID economy, one can only hope that small-time directors are not lost in the milieu.

You can catch both films this week at Event Cinemas or Hoyts Cinemas.

Verdict: Nomadland is a technical and emotional masterpiece, touching on the singular gaze of an American nomad.