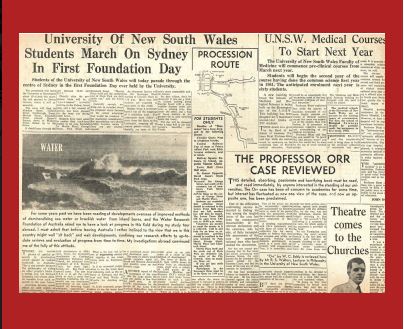 Alligators and Rolls Royces: Foundation Day Through the Decades

Alligators and Rolls Royces: Foundation Day Through the Decades

The phrase “Foundation Day” is not one that, on its face, sparks excitement. It sounds archaic and stuffy, the type of thing Tony Abbott would love to celebrate with the Queen whilst surrounded by Churchill biographies.

The history of Foundation Day at UNSW is anything but. Compared to the current Structured Fun™ organised by Arc, Foundation Day in the 20th century was literally riotous.

But what actually is Foundation Day? (Apart from, obviously, being related to the day of our university’s foundation.)

The UNSW website is marginally illuminating, describing it as, “the day we celebrate the birth of our glorious university.”

Upon further research, it seems that the first Foundation Day, held in 1961, was basically a student-organised publicity stunt to differentiate us from the University of Sydney. It is not actually held on the day of our foundation (1 July 1961), but on the second Thursday of Session Two.

“At that time, UNSW had no real identity in the public mind and some students still had lectures off campus,” the UNSW Archives explains.

“Students established the concept of Foundation Day because they wanted to impress on the general public that there were two universities in Sydney.”

In other words, UNSW had an underdog complex. Established in 1949, a massive 99 years after the University of Sydney, UNSW needed to do something out of the box to solve its identity crisis and attract students.

The (probably ineffective) attempts at getting one over the University of Sydney have continued to the present day.

In 2007, the Sydney Morning Herald reported that three UNSW college students burnt the word “UNSW” into USyd’s quadrangle lawn as part of Foundation Day festivities, a matter that was referred to the police and allegedly cost the University of Sydney $4,000 to repair.

When I relayed this anecdote to my housemate who is a student there, they laughed and said, “That’s cute”.

The first Foundation Day in 1961 included pranks, world records and (importantly) a day off class for students. Some pranks bordered on illegal: a Mosman ferry was taken over by “pirates” and a television show host, Brian Henderson, was kidnapped on live TV.

Students also draped a massive banner advertising the Sydney Moaning Tharunka across the Sydney Morning Herald building (a move that would be fairly on the nose in 2017 given the current state of the media industry).

The day then ended, as it did for the next 22 years, with a procession of 30 floats from the university to the city, along Anzac Parade. This is hilariously unimaginable today in a climate of never-ending light rail construction.

The Foundation Day procession stopped after things went too far in 1983. Indeed, celebrations were banned all together in 1984, and the day off from university was stolen from us as a form of eternal punishment.

The 1983 parade began innocuously. As the amazingly named individual Clark Rubber recounts in the 5 August 1985 edition of Tharunka, “Hell, it was all good clean dirty fun.”

The situation disintegrated, however.

“It was like all the bottled up annoyances of modern life just let loose all at once,” Mr Rubber said.

“I can remember sitting on top of the truck just hoping that a Rolls Royce would come by. And then one did!

“Tens of eager students leapt upon this symbol of opulence and smeared its immaculate black finish with flour.”

The rowdiness got worse.

“By the time we got to Hyde Park, things were getting really wild … Every gay joint in Oxford Street got flour hurled through their front door,” he said.

“Angry shopkeepers with raised fists would advance upon the parade, then fall back puzzled.”

The procession ended when the police confiscated the Student Union’s permit for the rally that they were ultimately going to hold in Hyde Park. (I wonder whether it was the victimisation of the queer community or rich dudes that really put the nail in the coffin for the parade.)

Tharunka has also often played a part in the festivities by publishing hoax stories and special satirical editions. In recent times, Tharunka published a prank article in 2014 claiming that pro-Palestine protesters occupied the Max Brenner on campus. The Daily Telegraph picked up the story.

One of the more bizarre (and ethically dubious) pranks was when students kidnapped an alligator from Taronga Zoo in 1964. They managed to wrangle a “ransom” of 100 pounds out of the Zoo.

The UNSW Facebook page, when relaying this anecdote on 4 August 2016, noted, “we are not proud and we do not condone this behaviour :)”.

Kidnappings continued throughout the years. In 1981, students kidnapped the Chancellor, Gordon Samuels, from outside his house and made him drive to his chambers. Mr Samuels was freed after the University Council and senior officer met ransom demands, which were then donated to charity.

Current Foundation Day celebrations truly pale in comparison. In fact, Foundation Day doesn’t even seem to stick out as a special event in the student consciousness (except for perhaps college students).

When I ask my friends about their thoughts, I am met with general bemusement and unhelpful comments such as, “It was the day we were founded, right?”

Last year, Arc hosted events on the Main Walkway with, “free food, milkshakes, bungee jumping, obstacle course and games.” At the time of writing, Arc informed Tharunka that this year’s plans are the “same deal” as last year (although, unfortunately, the dodgem cars that were on the cards at one point have since fallen through).

Most of the actual celebrations seem to be relegated to the colleges.

My main memory of Foundation Day is from first year, when drunken and scrappily-attired Warrane College boys sat in the back of my 9am English lecture, heckling my poor lecturer, who was nervy at the best of times.

An ex-New College student described his Foundation Day celebrations to me.

“We’d wake up and have a champagne breakfast at 7am, which was basically just goon, and some people would be trying to do 10 [drinks] before 10, but most people would be having a couple of drinks,” he said.

“Then we’d just wear silly outfits, of anything really, and would run around campus drinking and trying to be semi-disruptive youths.”

And it didn’t stop there.

“We’d go into lecture theatres with goon sacks and make College kids who had bailed on the celebrations to go to class do goon laybacks in the middle of the lecture,” he said.

“And then you all go to the party that night. At the Roundy.”

The sanitisation of Foundation Day reflects a broader trend of the university clamping down on anything that doesn’t directly contribute to profit or otherwise possess an element of the uncontrolled. It is inconceivable that Ian Jacobs would allow himself to be kidnapped in a spirit of playfulness. Any student who dared attempt such a feat would be rewarded with a stern talking to at best, and a visit to the police at worst.

A university isn’t the place to have fun or take risks, or so the university’s logic goes; rather, it is a place to be productive and to (ultimately) contribute to the university’s coffers. Even if we had a university-wide scheduled day off, I can imagine that many students would use it to work, study or get a good night’s sleep for once in the never-ending rat race to line our CVs and pay unaffordable rent.

A lot of the content produced by UNSW about Foundation Day is ironically nostalgic of Foundation Day’s rowdy past. Yet, nothing is being done to reinstate this so called glory.

This is a message directly for Vice-Chancellor Ian Jacobs: there is nothing wrong with flour and mud riots. We promise we won’t target any Rolls Royces.

In the meantime, our desire to free the “bottled up annoyances of modern life” will have to remain corked.

Read this piece (complete with footnotes!) in our Foundation Day issue, CHALLENGE, on stands now.