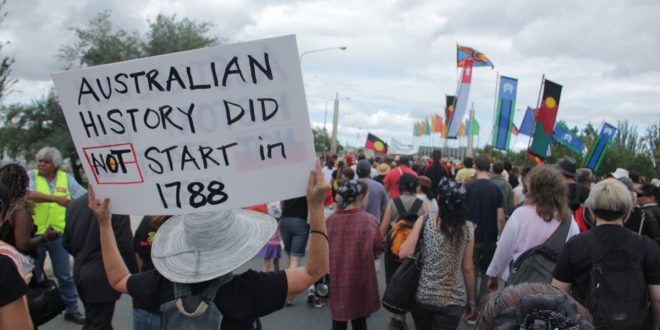 Against Australia: A Call for Indigenous Sovereignty

As more privileged Australians were confronted this year with apocalyptic scenes of raging fires, choking cities, and empty rivers which Aboriginal people have faced since colonisation, a movement for Indigenous sovereignty continued to emerge. At this year’s Invasion Day/Survival Day rally in Sydney, I listened as Alice Haines, one of the speakers, strongly condemned the Australian government: “Our land is on fire because of lack of management where the government has assumed ownership over lands we did not sell, and they have completely desecrated our lands and waters.” Another speaker invited non-Indigenous Australians to join the movement against the incarceration and killings of Indigenous people, and the destruction of the environment.

As the effects of climate change become more apparent, so does the need for radically different frameworks to deliver social justice. The wealthy are significantly more sheltered from climate change’s impacts than the poor and marginalised. One need only look at how prisoners are treated: inmates, many Indigenous, in Lithgow Jail were locked inside their cells as a bushfire burned 50 metres away.

Traditional approaches to Indigenous rights in Australia, such as native title and constitutional recognition, operate within the Australian legal framework. Indigenous sovereignty, by contrast, denies the legitimacy of Australian law. On a theoretical level, the Western distinction between the physical and non-physical world fails to recognise Aboriginal law ‘as a system of natural moral law which establishes an extended, spiritual identity between land and person’. Aboriginal legal scholar Mary Graham concludes that an answer to this conflict cannot come from within a legal positivist framework, which relies on existing precedents and social norms rather than reason or morality.[1]

Consequently, Australian/colonial law claims what legal scholar Maria Giannacopoulas calls a ‘nomopoly’ (an exclusive legal right) over Indigenous lands. Furthermore, she writes, ’it is structurally illogical that colonial law could ever deliver decolonial justice.’[2] Take native title. The lauded milestone in Aboriginal land rights does not guarantee that traditional owners will always be able to access their land after successfully claiming it, especially when there are economic and political interests at play. Notably in 2019, the Queensland government extinguished native title over 1,385 hectares of Wangan and Jagalingou country to enable the construction of the Adani coal mine.

On most, if not all, practical issues the Australian government has failed to deliver better outcomes for Indigenous communities. The rate at which Indigenous children are removed from their families and placed in out-of-home care has not decreased at all, but significantly escalated since Rudd’s famous apology in 2008. And of the $33.4 billion in State and Territory government expenditure spent on ‘Indigenous Affairs’ only $6 billion is targeted and measurable, going directly to services and programs dedicated specifically to Aboriginal and Torres Strait Islanders. The majority of spending is non-targeted and provided for all people, such as for hospitals and job agencies. In Saunder’s succinct summary: ‘This means that we don’t exactly know where the money is going or even if it is being spent on Indigenous issues.’[3] Yet many Australians continue to buy into the racist, paternalistic, and simply untrue narrative that Indigenous people are slacking off because they get free money from the government.

It is clear that the Australian state is structured to oppress opposing claims of sovereignty, both through its legal framework and the material effects of its policies. This is something that should worry everyone concerned with truth and justice. Celebrations such as Australia Day and the replica Endeavour voyage cement a small and violent period of time as the ultimate story of the continent which had sustained many nations for over 120,000 years. In reframing this narrow, ideologically-driven narrative, Indigenous sovereignty activists are telling the “black truth” which challenges “‘white supremacist’ truths of history”.[4] In remembering Indigenous history and validating non-Western discourses and philosophies, we are also able to imagine a future beyond the social and ecological destructiveness of settler colonialism.