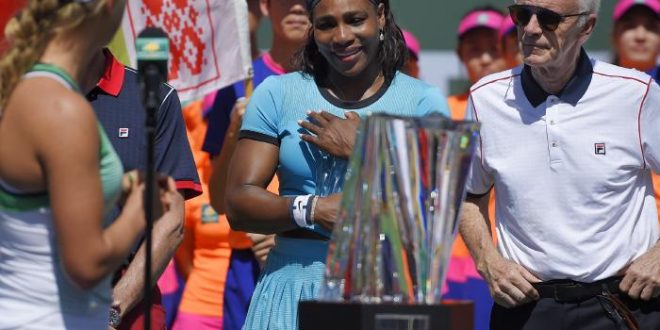 The Achievements of Women in Sport: Why are they still being forgotten?

I admit that I’m not an avid sports fan. I rarely pay attention to sport unless it’s unavoidably on the news, and the only time I follow the tennis is in January when the Australian Open is on. This is why, when I came across the recent remarks made by the Tournament Director of Indian Wells, Raymond Moore, I was shocked that such sexist comments were still being made in contemporary sport.

Moore’s comments were as follows:

“In my next life when I come back I want to be someone in the WTA [Women’s Tennis Association], because they ride on the coat tails of the men. They don’t make any decisions and they are lucky. They are very, very lucky. If I was a lady player, I’d go down every night on my knees and thank God that Roger Federer and Rafael Nadal were born, because they have carried this sport. They really have.”

These words were spoken a few hours before the women’s final between Serena Williams and Victoria Azarenka. After Williams was shown the remarks in a post-match interview, she quickly condemned Moore’s comments and rejected the idea that they were misinterpreted.

“There’s only one way to interpret that, ‘get on your knees’, which is offensive enough and ‘thank a man’? We, as women, have come a long way. We shouldn’t have to drop to our knees at any point.”

To believe that Moore would tell a player like Serena Williams, who has won 21 Grand Slams and has been playing professional tennis for 21 years that she should “thank God” for Federer and Nadal, denigrates the achievements of women in tennis.

Widespread media attention of Moore’s remarks resulted in a public apology following the end of the tournament, and his resignation the next day.

They have also revived a contentious debate about whether women deserve equal prize money to men. Novak Djokovic added to the controversy by suggesting that male tennis players should “fight for more” money because their matches attract more spectators.

If we respond to Djokovic’s comments directly, we would see that women’s tennis matches have on many occasions already gained more spectators than men’s matches. In the US Open from 2013-2015, TV ratings were higher for the women’s final than the men’s. The Lindsay Davenport and Venus Williams Wimbledon final in 2005 also had 1 million more viewers than the final between Roger Federer and Andy Roddick.

If you follow the logic that popularity should ensure more money, historically this has not always been the case. It is interesting to note that male figure skaters and gymnasts have less spectators than women, although, they are paid the same amount for winning world championships.

Last year, the Australian Women’s Cricket Team won the Ashes and the Australian Netball Diamonds won the Netball World Cup, although according to the Australian Sports Commission report, Towards a Level Playing Field: Sport and Gender in Australian Media (2015) women only feature in seven per cent of sports programming in Australia, therefore not receiving the same endorsements and sponsorship deals to secure any chance of equal pay.

Tennis Grand Slams are in fact, one of the only professional sports where women are currently paid equally to men and receive similar television airtime. Perhaps this triggers another frequently mentioned argument: men should get paid more because they play five sets opposed to three sets for women. This argument is misleading, as it only applies to Grand Slam tournaments, with three sets being the norm for all other tennis tournaments. Studies have also shown that five set tennis matches, can cause considerable long-term damage and shorten player’s careers. For this reason, tennis professionals such as Billie Jean King have advocated for all matches to be three sets.

In light of these differences, female tennis players still have the same training schedules and endurance as male tennis players. The Women’s Wimbledon Final in 2005 lasted 45 minutes longer than the five set match in the Men’s Final of that year. I would also argue that this point of debate should not be at the forefront, when the achievements of women in sport are still being denigrated by misogynist remarks or a lack of media coverage.

Comments like Moore’s or even Djokovic’s are not constructive and attempt to undermine what women’s tennis has long fought for; equal pay for equal achievements. In a broader sense, it is even more important to realise that there are still many sports where women do not receive equal incomes, sponsorship and media coverage. As individuals and as a society, it is important to address these issues and clearly highlight where the true injustices exist.