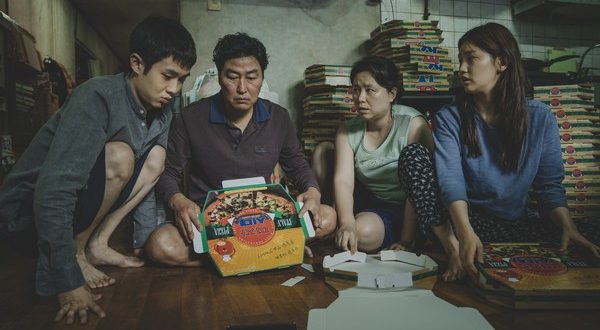 A Welcome Parasite: Changing the Face of White Hollywood

“Once you overcome the one-inch tall barrier of subtitles, you will be introduced to so many more amazing films.”

These were the words of South Korean director, Bong Joon-Ho after receiving the prestigious Best Foreign Language Film award at the 2020 Golden Globes, for his critically acclaimed drama-thriller, Parasite. Shortly after the Golden Globes, he received an impressive six nominations at the Oscar nomination ceremony. Weeks later, he walked home from the Oscars with four huge trophies: Best Director, Best Original Screenplay, Best International Feature Film and, in a thrilling upset, Best Picture. That night, Parasite made history as the first film in a language other than English to receive the prestigious Academy Award for Best Picture.

The Academy has always disproportionately praised the work of white men over minorities and women. Besides occasional nominations for Best Picture, non-English films usually only succeed within the confines of the Best International Film category, which itself has historically been badly defined. In April 2019, The Academy renamed the category from Best Foreign Language Feature to Best International Feature Film (the terms of eligibility did not change). The name-change signified The Academy’s attempt to look at filmmaking as an international phenomenon, rather than othering non-English films by naming them ‘foreign’. This excellent Vox piece went into further detail about the political tension surrounding the International Feature Film category.

Awards Season has always been at the forefront of the battle for representation in cinema. The snubbing of people of colour is sadly still very prevalent in award shows, and this is infamously demonstrated at the annual Academy Awards (google #OscarsSoWhite for more on this). In 2018, Alfonso Cuaron’s critically acclaimed historical drama, Roma, received an impressive ten Oscar nominations, including Best Picture. However, it was only successful in three categories: Directing, Cinematography, and Foreign Language Feature. In 2000, Ang Lee’s Crouching Tiger, Hidden Dragon fell into the same trap, receiving a nomination for Best Picture, but walking home with only Best Foreign Language Feature.

Bong Joon-Ho’s Parasite follows a lower-class family in South Korea, the Kims, who infiltrate the home of a wealthy family (the Parks) by posing as English tutors. As the two families co-exist, they begin to form a symbiotic relationship which allows the Kims to experience life on the other side of the economic spectrum. The cast consists of an all-Asian ensemble hailing from South Korea, and is spoken entirely in Korean, with English subtitles. It explores ideas about class tension in South Korean society, and portrays a spectrum of South Korean citizens, from the wealthy and powerful to the poor and vulnerable.

Parasite’s central theme of class inequality is wide-reaching and transcends language and cultural borders. Parasite explores conflicts between the upper and lower classes, through the stories of two very different families from different economic backgrounds. These themes provide a unique outlook on class disparities which exist in most areas of the world, and perhaps it is this universality which made the film capture the Academy as well as audiences worldwide.

After years of snubs and outraged movements for recognition of non-English films at the Academy awards, Parasite’s success marks a big step forward in the battle for recognition of international films by the Academy, and mainstream audiences. Many social media users championed the film and expressed hope that Parasite will be the catalyst for other Korean, Asian, or international films to receive Oscar recognition in the future. Among other positive reactions, many film buffs used the win to start a conversation on their own favourite Korean films that had been snubbed in the past.

Although the win was met with pride and relief at seeing Asian cast and crew on that stage, it was also met with a healthy dose of racism. Those rooting for other films such as Joker or Once Upon A Time in Hollywood hid their outrage under the guise of American patriotism. American sportscaster, Jon Miller, came out with a controversial tweet criticizing director Bong Joon-Ho’s use of a translator in his acceptance speech, calling the win, “the destruction of America”. More recently, President Trump criticised Parasite (a film he hasn’t seen) because it is a South Korean film: “How bad were the Academy Awards this year? The winner is a movie from South Korea, what the hell was that all about?”.

After decades of Best Picture going to English language films, usually with an all-white ensemble cast, many disliked this change to the status quo. However, British films, like the critically acclaimed 1917 (which received ten Oscar nominations and won three of them), were not met with nearly as much anger as Parasite’s win. Parasites success was a wake-up call to Americans that their outrage was not so much a result of patriotism, but a Euro-cntrist view of film which favours movies in the English language. As LA Times film critic Justin Chang wrote, Parasite’s win, “has startled the Academy into recognizing that no country’s cinema has a monopoly on greatness.”

Parasite’s success in the Oscars this year has taken a big swing at the subtitle barrier that Bong Joon-Ho spoke of in his acceptance speech. The win spreads hope that non-English films can escape the confines of the seemingly inescapable International Feature Film category, and that the work of great non-English-speaking filmmakers can continue to receive the awards and recognition they deserve.

Previous The Peanut Butter Falcon Review: A Soul-Stirring Journey
Next “We are the original storytellers”: Taika Waititi’s Oscar Win