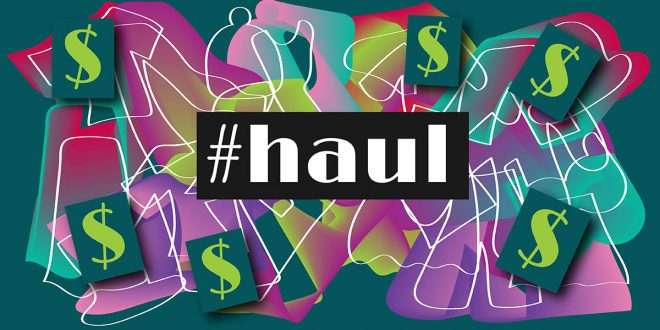 I sit there gawking as the girl on my screen rummages through a large box overflowing with little plastic packages of clothes. It’s kind of like watching the aftermath of a car accident: shocking, disgusting and a little bit exciting all at the same time. The sheer excess of it all makes it hard to look away.

Moments later, another girl pops up holding two white, bulging garbage bags, one in each hand, standing under a moving banner “Thrift Haul” … 2.1 million views. She continues to wave in front of the camera a series of Y2K type capri pants, baby tees, chunky shoes and fluffy photo frames that Lorelai Gilmore and Lizzie Maguire would be proud of.

In the minds of most Gen Z users, one of these videos is a grotesque display of hyper-consumerism in its most unethical form, while the other embodies the sustainable values imprinted on our generation.

Under the banner of the trending #haul (raking in 11.4 billion views on Tiktok), is there really a difference between the two?

Not really. Nor is there a difference between the millions of videos like them online: a person (conventionally a thin, white female) stands in front of a camera flexing the amount of clothes she got in one hit. These videos move with the ebb and flow of trending style with one parading a display of fast fashion at its peak, while the other dodges ethical criticism under the label of second-hand, nullifying the damage of what is excessive consumption.

Growing up amidst the loudest calls for climate action has meant that 6 in 10 young people are extremely worried about the impacts climate change and have shifted the way they live accordingly. A report by resale site ThreadUp has predicted that shopping second-hand will be worth double the fast-fashion market by 2030, with over 40% of Gen Z shoppers purchasing used clothes in the last 12 months.

While it is true that the benefits of second-hand shopping are unrivalled in the fashion industry, the performative nature of #haul culture on TikTok and Youtube makes it difficult to determine whether creators are engaging in conscious consumption or just hopping on the trendy bandwagon for clout.

Thrifting hauls are paradoxical. They are this peculiar amalgamation of preaching sustainable practice yet indulging in hardcore glamorised consumerism. It’s tough a task to distinguish whether this practice is tokenistic or genuine. It’s even tougher work out whether it is better than doing nothing at all, or is simply amplifying over consuming.

The allure of unique and ‘one-of-a-kind’ trendy thrift finds combined with low prices and the potential of going viral means that creators are quickly jumping onto the thrift haul bandwagon.

Not only does this make you question people’s consumption intentions, but there are also concerns that the proliferation of thrifting (and by extension re-selling) is gentrifying second-hand stores. An article by Vox highlighted the surging popularity of second-hand shopping and competitive reselling has caused thrift stores to mark up their garments, pricing out people from lower socioeconomic backgrounds. In a world where buying slow fashion is only available to those with a disposable income, second-hand stores are a haven for those who need lasting clothes that don’t cost half a paycheck. Furthermore, it’s not uncommon that the only things you can find in a thrift store are Target shirts for example as Depop sellers have snatched up anything of quality.

It is understandable how high the temptation might be to replicate haul videos, especially when you have the means to do so. It is also understandable how hard it can be to escape the viscous tentacles of fashion marketing that seem to creep their way into all of our online spaces. If you can, avoid fast fashion and shop small. Second-hand is great when consumed in moderation and is not just bought for the sake of views. However, the most underrated and sustainable way of consuming is simply by wearing and maintaining the clothing that already live in your closet. They probably miss being worn, so give them some loving.

Share
Previous More than just smut: The dismissal of fanfiction
Next I’m Sold