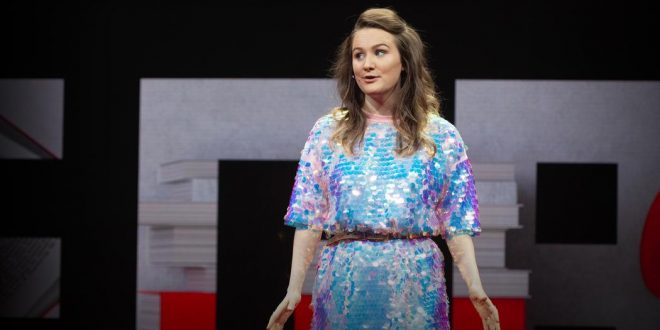 A Conversation with Yve Blake, creator of hit musical, FANGIRLS

If you have been paying any attention at all to Australian theatre lately, it’s likely you’ve  heard of Yve Blake. Blake is young, passionate and incredibly talented. At only 27 she has already written a hit musical, Fangirls, an ode to teenage girls and their passions. The show premiered at the Queensland Theatre Company and Belvoir St Theatre in 2019 to critical and commercial success and is currently on a national tour.

I was lucky enough to review the Belvoir leg of the 2019 Fangirls run and loved it. That review can be found here.

Recently I got to chat to Yve about female directors, writing teenagers authentically, and young performers who are inspiring her right now. Have a read!

Please note, this interview has been condensed and edited for clarity.

Let’s start off with some short, quick questions:
Favourite Play?

Two musicals that really impacted as a teenager were Legally Blonde and In the Heights. My favourite changes all the time, but those two were very meaningful and shaped who I wanted to become a writer.

Oooh, again that’s hard! I guess it changes all the time but one I’m always impressed by is a woman called Bekah Brunstetter. And then locally, I really love Anchuli Felicia King.

Could you tell me about your experience as a young woman in theatre?

As a young woman I grew up obsessed with musicals, but then I was disappointed to realise just how many of my favourite musicals were written by men. And that’s not necessarily a spite against those men, but if you get someone to name their favourite musical, the odds are, like, 9 to 1 that it’s going to be written by a man, if not created by an entirely male team.

And directed by a man too!

And then while we’re talking about gender, let’s go a step further and let’s talk about the over representation of white talent on stages and in musical theatre.

So, I guess I came to Fangirls going: “I want to create something that is the show I wish I had been able to see when I was 15.” So, I wanted it to be helmed by women and I didn’t want to centre a white experience. Those were some of my goals with Fangirls, and that’s certainly been a massive part for why I didn’t want to perform in it a second time.

(In the original 2019 run of Fangirls, Blake performed as the title role of Edna. For the 2021 return season and national tour, Karis Oka, a woman of colour, is playing the role of Edna.)

So, on this idea of female authorship, you mentioned that musical theatre writers and directors are often men. Was it important to you that Fangirls had a female director?

I made it a condition. You know, when I started pitching this in 2016, without naming any names, a lot of people expressed doubt that there was a woman in Australia who was “experienced” enough and I just think that’s a crock of bull.

If that’s the case, it’s only because women haven’t been entrusted with opportunities at scale enough. So, I was very, very staunch that it should be a woman and very staunch that it should be Paige [Rattray]. And I’m so happy for that and now her qualification to do this is undeniable. (Paige Rattray directed Fangirls and is currently the Associate Director at Sydney Theatre Company).

Were there any other works of art about teenage girls that inspired you when you were writing Fangirls?

It’s cool to see a new wave of popular culture that’s about portraying young women in a really authentic and truthful way. Because when I grew up, the big show was the OC where you had hot 30-year-olds who looked like models playing teenagers, and I was covered in acne and couldn’t relate to anyone on screen.

So that was a massive goal for me, to represent teenage girls in a way that felt honest, and to do that I had to draw them for what they are. And as a teenage girl, I was just feral and awkward, and I stank! (laughs).

Fangirls does feel notable for its refreshingly realistic treatment of social media, especially its depiction of online fandom culture.

Oh, that’s nice to hear. Well, I did a lot of research! I was not one of those people growing up, so I had to contact a lot of people and listen to people who currently write fanfic. My greatest fear was representing the people I am writing about in a way that isn’t fair and truthful, so I did a lot of research and I hope it paid off.

So obviously the audience at Tharunka is young university students. What advice would you give to 21-year-old Yve?

Look, the number one piece of advice I would give is when something good happens for a peer, always celebrate their work. Never let yourself get competitive. Never be disappointed by anyone else’s success.

Like obviously work hard… But we don’t go into this industry for money, so all you get as a guarantee is relationships and friendships, right? That’s the most important thing and you have to really, really take care of people.

Do you have any suggestions for ways that young people in theatre can meet other people like them to collaborate with?

If you wait around forever for Sydney Theatre Company to develop your work, you’ll be waiting a long time.

Be an initiator. Scrap together play-readings around your dinner table, introduce yourself to people. If someone’s struggling to sell tickets to their shows, offer to help! Lend a hand, because you might need one.

Are there any other young, early-career artists who you think we should all be paying attention to?

Yeah, I’ve got heaps! So in terms of the musical theatre space in Australia, everyone needs to watch out for Vidya Makan, Jules Orcullo, Cassie Hamilton, Janet Anderson and Chika Ikogwe who was in Fangirls and is also an amazing writer.

For my last question, what do you have planned for your future?

I am really excited to be co-writing this feature film about Rock Eisteddfod with Thomas Wilson White, he’s a legend.

I am also co-writing a podcast musical about Mary Wollstonecraft with a writer called April DeAngelis, which is in development in the UK.

And everything else I can’t talk about!

Great, and that’s all my questions! Thank you so much for letting me chat with you Yve, and I wish you all the best with all these projects in future.

Fangirls is currently doing an Australian tour and ticket information can be found here.

The Fangirls Studio Cast Recording is due to be released in full on April 30th, and two of the singles “Nobody” and “Feels So True” are out now.

More information about Yve can be found on her website here.

Share
Previous “hope youre well”
Next Violence on Oxford Street: can you heal with the people who hurt you?