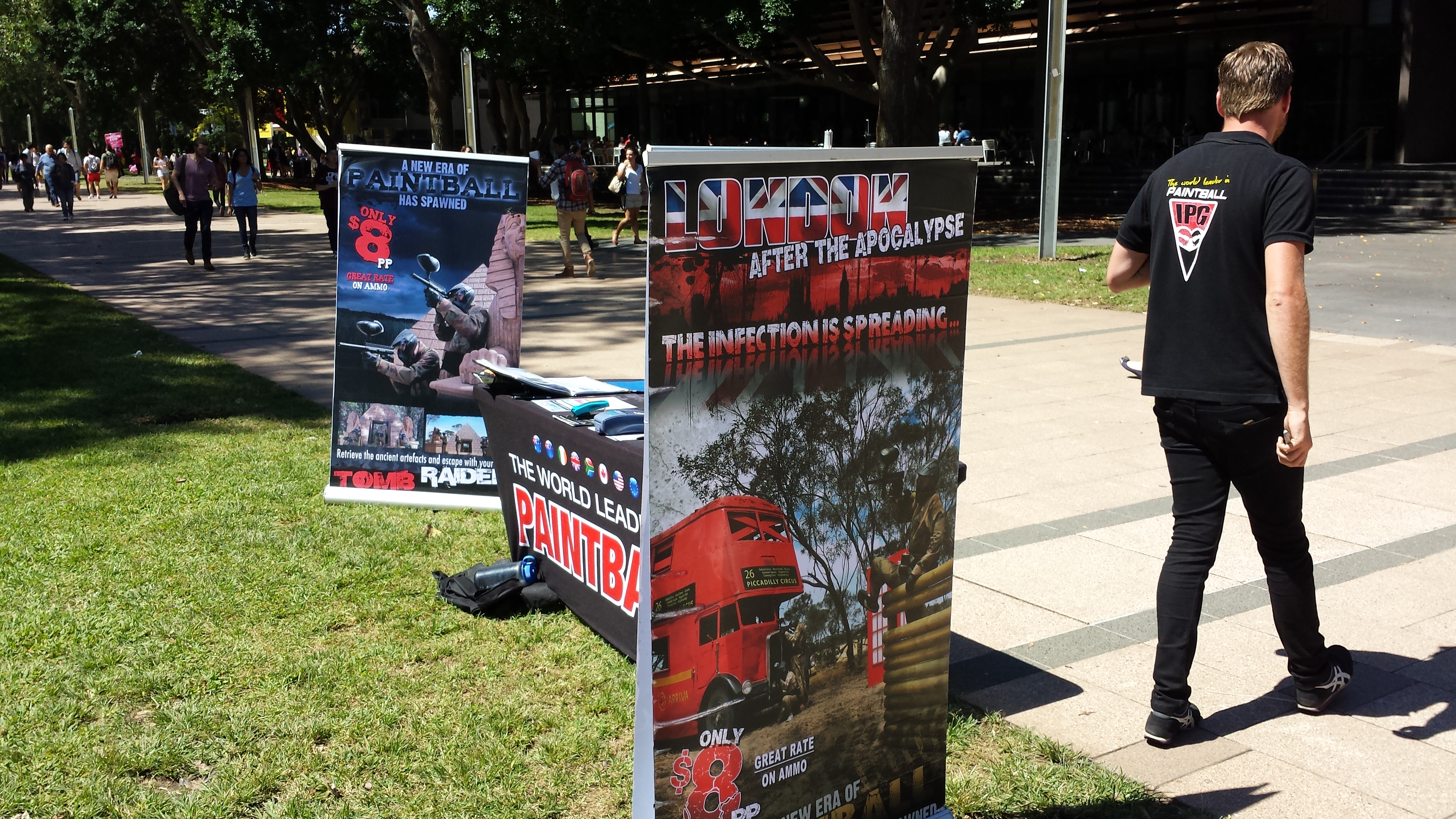 The International Paintball Group (IPG) can often be seen spruiking their $8 paintball deals on the main walkway. I wish to inform you that IPG misrepresented and outright lied to me about the true prices and conditions of that deal.

IPG’s sale tactic is to lure people in with the tempting deal of only “$8 per person”, plus a “great deal on ammo”.  Allegedly, $8 is all that is required to cover basic equipment and registration for each player. In reality, the cost of equipment is extracted through a higher $25 rate for the first one hundred paintballs. This distortion of cost allocation is designed to fool people into committing some money initially. Then, as the true costs and hidden fees gradually reveal themselves, customers feel they have already committed too much to pull out.

This tactic is so successful that the FAQ page on IPG’s website even features a question about this higher rate. They claim that salespeople who choose not to mention this extra cost have done nothing wrong because it’s in the fine print of the contract.

On 16 October 2013, a salesperson told me that paintballs cost 10 cents each after the first one hundred. I committed to 30 tickets for a paintball event to be run by a UNSW student society, based on the number of expressions of interest I received at this price. Only once I attempted to pay for the extra paintballs, did I find out that they cost 14c each.  This 40 per cent difference drastically reduced the number of sign-ups, so some of the places the society had already paid for were not filled. Consequently, the society made a loss.

The same salesperson also told me that we could play from half-past twelve to half-past four at any venue. However, later, when I attempted to book for a specific date, I was told that this is only true at the most remote venue. All other venues would allow play for no more than three hours, including breaks.

IPG salespeople try to overcome customer cautions by emphasising a “ten day cool off period”, during which time you can get a full refund. This tactic is especially effective when combined with the claim that the $8 deal is “just for today”. This is simply not true – the same deal has been sold at every O-Week, Welcome Back Day and Week of Sport for at least the past two years.

The salesperson I spoke to explicitly and repeatedly said that this refund would incur no fee. This is a lie. Point 14 in the fine print states, “Refunds may attract an administration fee and take up to 21 working days to process.” The absence of any mention of the limit on such a fee is quite worrying.

The refund administration fee is not the only hidden fee. IPG charges a four per cent handling fee on everything purchased over the phone. Whilst paying for ammunition, I decided to increase the size of my purchase before finalising the payment. Consequently, IPG tried to charge me the four per cent handling fee twice for the one sale, totalling $64 for one transaction. Furthermore, there is no mention of this fee on IPG’s contract, flyers or websites, and the employee taking my call did not mention it. Luckily, I thought to calculate what the price should have been before stating my debit card details. I noted the difference and negotiated to have the four per cent fee charged only once. By the time I had paid for the $8 tickets, the extra expensive first hundred balls per person, and the extra paintballs and lunch on the day, I had been charged over $100 in hidden fees.

Similarly, there is no mention on IPG’s contract, flyers or website of the premium of over $1 per minute charge for calling their only phone number. They deliberately called me several times per week in the lead up to the event to “check-up” on me. Such a check-up can show good customer care. However, IPG went so over the top that after the event, I realised that I had been charged $53 for replying to the multitude of voicemails they left (and complaining about their salespeople’s false advertisement). Whilst this may not be technically illegal, it is unconscionable.

The cashiers at the venue refused to give out receipts for ammo purchased during the event. This is certainly illegal. As a result, the student society I was running this event for was also unable to recoup much of the costs from Arc because they require proper proof of purchase.

I am not the only one who has had such troubles. A quick Google search will reveal many forum posts from frustrated customers all over the world with the same complaints. I expressed my concerns about false advertisement to IPG. The company said it would investigate the matter, but it also claimed it was impossible that IPG’s salespeople made false claims. I never heard back from anyone. IPG seemed to care little because it knew I had no proof that they lied.

I raised my concerns with Arc, who only responded after almost two months of repeated emails. The Arc sponsorship team eventually sent me a polite response stating, “We have informed IPG of the several issues you raised and received a very detailed response from IPG’s National Sales Manager which we believe has satisfactory addressed the issues you raised.” Consequently, IPG were invited back on campus for O-Week.

After feeling somewhat powerless because most of my concerns were founded on unprovable conversations, I recorded a chat I had with them at their stall on the main walkway in Week One, pretending to be a potential customer. During the chat, they did state the true price of ammo, however, they answered my query about the length of the events with, “It’s an eight-hour day, full eight-hour day,” despite the fact that you only get three hours at IPG’s Peakhurst and Concord venues. Similarly, the salesperson explained that “there’s a ten day cooling-off period, within ten days they can refund it”, without mentioning the refund fee.

The student society I ran this event for lost over one hundred dollars due to IPG’s false advertisement and hidden fees. If you have had similar problems with IPG, please contact Tharunka. Unfortunately, IPG are still allowed on campus, but I hope that this article prevents other students from falling into its trap.

Previous The Day the Laughter Stopped
Next On your mark, get set… and come out