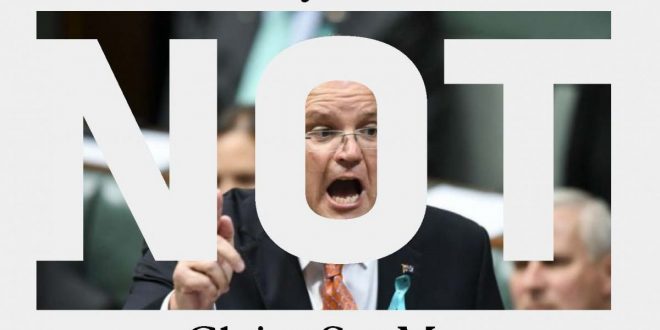 5 Reasons Why UNSW Should Not Claim ScoMo as an Alumn

Let’s be clear: the PM’s attitudes toward marriage equality, both during the plebiscite and during the passage of the bill, directly clash with the UNSW Chancellery’s own message on one of our generation’s landmark human rights debates.While the Chancellery shied away from making an overtly political statement during the plebiscite, to its credit, UNSW did attempt to reach out to the LGBTIQA+ community as they faced an incredibly intense and confronting campaign that saw powerful voices in society seeking to erase the entire concept of their identities.
The university’s “clear and explicit ambition to contribute to equity, diversity, and inclusion for students and staff”, as stated by President and Vice Chancellor Ian Jacobs, should extend to rejecting the continuously harmful statements that ScoMo espoused throughout and following the plebiscite.
So, what exactly did ScoMo say during the plebiscite campaign? Put simply, every response Morrison has made to this issue has been an explicit insult to the LGBTIQA+ community.
Throughout the campaign, Morrison made it clear that he was voting No, parroting one of the No campaign’s ridiculous slogans, “It’s OK to Say No”.
He couldn’t even muster the courage to take his seat in Parliament to cast a vote on the final bill, despite the noise made by Coalition MPs on the plebiscite being the will of the people.
Finally, after marriage equality had been signed into law, Morrison dodged questions on whether LGBTIQA+ Australians will supposedly go to hell, before a spectacular reversal of his opinion, seemingly trying to hide his outdated views from the Australian public.

UNSW should not be proud to have someone with such hurtful and ignorant views representing the institution and its students.

Australian students breathed a sigh of relief in 2014 when the Higher Education and Research Reform Amendment Bill 2014 floundered in the Senate, after the Government failed to gain the support of crossbench Senators. The then-Minister for Education and Training in the Abbott Government, Christopher Pyne, tried to push through a series of reforms that would have made students pay more to go to university, and rip Commonwealth funding from the higher education system.
Scott Morrison, as Member for Cook, voted for the following damaging reforms that would hurt students:

Why would our university be proud of an alumnus that voted to rip a significant amount of Commonwealth funding from higher education?

UNSW students should be proud of the research done by our university’s Climate Change Research Centre (CCRC). Meanwhile, anyone remember our PM breaking Parliamentary standing orders to wave a lump of coal around in Parliament – loudly claiming “don’t be afraid, don’t be scared, it won’t hurt you. It’s coal”?Given that Morrison’s political assent was boosted by the Coalition’s paralysis over Turnbull’s ill-fated National Energy Guarantee, nobody should be surprised that his views on climate science are horrifically out of date. After Morrison lectured school students at the 2018 Student Strike for the Climate to be “less activist”, Stephen Healy, the Research Coordinator for UNSW’s Centre for Energy and Environmental Markets, rebuffed remarks like those from the PM, stating that school students “deserve to be heard, not silenced”.
If our university wants to reflect well on the meaningful work of its own Climate Change Research Centre, it can start by disowning one of the Coalition party room’s most prominent backers of a failed Abbott-era energy policy.

It’s no secret that our Prime Minister’s return to the Lodge after the 2019 federal election was on the back of dirty deals with Clive Palmer’s United Australia Party and Pauline Hanson’s One Nation.
That our PM returned to power off the back of a deal with fringe parties that deal in fear and division (remember Pauline Hanson’s “swamped by Asians” comments in her maiden speech to Parliament in 1998?) is an insult to the diverse communities of international students that study at UNSW today.
Remember when ScoMo was rebuked by his own Foreign Minister at the time for referring to China as a “customer” of Australia?
UNSW should do the right thing, and not celebrate the return to power of a figure whose ascendancy was elevated by fear and division, peddled by fringe far-right parties.

Many students and academics at UNSW agree that the Kensington campus was built on the traditional lands of the Bedegal people – that the land was stolen, and sovereignty was never ceded.
ScoMo is clear that he doesn’t think the same way – so why should UNSW give tacit support to his outdated and offensive beliefs?
In his 2008 maiden speech to Parliament, Morrison stated that he “did not share the armband view of history, black or otherwise” and that “a strong country is at peace with its past” – failing to appropriately acknowledge the injustices that still exist today as a result of heinous crimes committed by European invaders.
In fact, in his own electorate of Cook, Morrison spent $48.7 million on commemorating his electorate’s namesake’s arrival to Australia, a move condemned by Indigenous activists as an inappropriate celebration of the beginning of the European invasion.
Morrison’s harmful views on our history contradict those of the students and staff at UNSW, so why should we celebrate them?

Our Prime Minister may have studied at UNSW, but his beliefs and his actions contradict many of UNSW’s own policies and attitudes on marriage equality, climate change, higher education funding, diversity, and Indigenous issues.
It’s time the University took a stance against Morrison’s outdated views, and stop claiming him as an alumnus of our proud and forward-thinking campus.

Dexter is a fourth-year chemistry student, President of the UNSW Labor Club, and an SRC Councillor. While working as a building management systems engineer, he uses his spare time to fight for progressive causes and a Labor Government.

Share
Previous What Happened At Engadine Maccas?
Next Diary of a Non-Terrorist