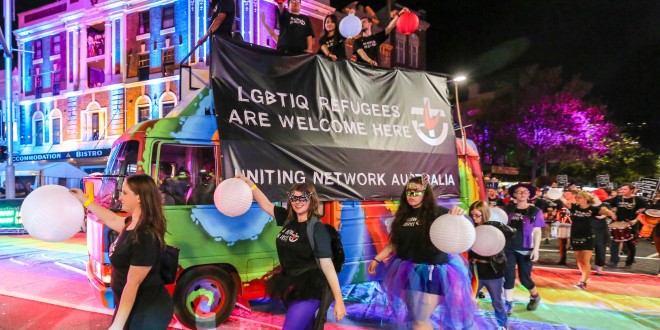 John, I have a confession to make.

While I’ve never met you, I already feel like more than just our communication is substantially one-sided. Your arguments are teetering on the edge of absurdity, failing to be balanced by adequate research and accurate reasoning.

I understand the gravity of this criticism, so I will give you some time to process it.

Yes, Mardi Gras is now a big party with half-naked people drinking and dancing to the beats of Kylie and Madge, but it’s still an influential event that launches queer issues into mainstream media in a better light than Eddie Redmayne or Jared Leto have. It is not only a celebration of the progress we have made, but also as a reminder of how far we still have to go.

My housemate Aaron, a law undergrad and all round top notch human, marched as part of the Legal Aid float this year, following up from his volunteering efforts last year. That’s a long way from the awkward, closeted teen from Newcastle watching his first parade in 2012. In fact this exemplifies how the national broadcast of the parade by SBS can give a glimmer of hope to a teen without support, simply by airing an event that displays the kinship, encouragement and celebration of diverse sexual orientations and gender expressions.

Mardi Gras is an internationally renowned revelry in queer culture, and participation varies from celebration to protest – both of which contribute more to the progress of queer issues than your article could ever hope to. Involvement in Mardi Gras, either as part of the LGBT community or as a ally is not to the mutual exclusion of greater contribution or support. Consider the list of every float at the 2016 Mardi Gras Parade on samesame.com.au – including twenty10, the Australian Queer Student Network and an array of charities, non-profit organisations and services.

The great Aristotle once said “Education is an ornament in prosperity and a refuge in adversity.” In your article, it’s evident that you aren’t seeking refuge – unlike the asylum seekers supported by No Pride in Detention, who organised the largest Mardi Gras Float of 2016. These proud and queer activists unapologetically stood their ground against parade security, threatening to remove them if they approached the leader of the opposition Bill Shorten – one of the three party leaders in attendance this year. That politico presence is despite the fact that the community has been used as a political chew toy for the better part of 5 years, particularly over the issue of marriage equality.

If education in prosperity is ornamental, let’s digress into a brief history of Mardi Gras, so that you too are as extravagantly decorated as a drag queen on Oxford Street that first weekend of March.

Mardi Gras started in 1978 to coincide with the International Gay Solidarity Celebrations. It marked the 9th anniversary of the Stonewall riots in New York City. The initial march was a protest. Starting in Taylor Square and following a small truck playing music, the number of participants swelled from a few hundred to over 1500 people as the parade wound its way to Hyde Park. The participants were harassed all the way down Oxford Street by members of the NSW Police Force.

What happened next made international news. Police arrested 53 people in a striking display of violence. In the aftermath, participants launched a campaign forcing police to drop the charges against the accused, and lobbied for NSW Parliament to change laws around public assembly.

That is how the Mardi Gras Parade was born.

Mind you, they did this while homosexuality was still a criminal offence! A mere thirty-eight years later, those initial protesters – donned The 78ers, after the year of the original march – still front the charge of floats on foot. So, calling this event a mockery of morality and civility is not only ignorant, it’s profoundly insulting. The 78ers risked their lives and livelihoods to contest that very idea. They marched despite the fact that not only the public but the law stated that their existence was a mockery of morality and civility.

So, take some advice from people who might be better positioned to give it – Australian rock band, Jet – “Look what you’ve done, you’ve made a fool of everyone.”

This is in response to the article, ‘Seroukas Sermon: LGBT (Let’s Go Binge Together)’, featured in Blitz Magazine on 14 March 2016.