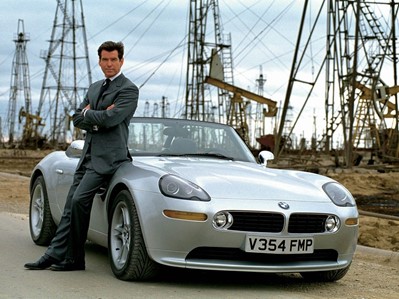 Pierce Brosnan’s Bond in Azerbaijan (The World is Not Enough)

As the November release of No Time to Die edges ever so closer, it’s time to continue with the second part of our 007 retrospective. Last time we examined the evolution of Bond girls throughout the series’ 50-year history. This time we’ll be analysing the films through a socio-political lens and delving into how the changes in geopolitics in the past half-century has impacted its depiction of different countries and cultures.

When Ian Fleming’s first novel Casino Royale was published in 1953, Great Britain was still recovering from the War. Although the idea of British exceptionalism was prevalent due to the nation’s role in defeating fascism, the country was also experiencing both an economic decline and a decline in power as its “Empire beyond the seas” started to crumble.

James Bond is a unique literary product of this time period- an assassin who carries out the directives of Her Majesty’s Secret Service across the continents, safeguarding the ‘Free World’ while bedding glamorous women. In a way, Bond represents the entire conflicting notion of Britishness, both in its glory and shame. We must view the films with this in mind.

London, as the nation’s capital and where MI6 is based, serves as a city of familiarity for Bond. Whenever the story needs a change of rhythm, London is the place to go. In Skyfall and Spectre, director Sam Mendes uses the city as a backdrop to stories more personal to Bond, a symbolic gesture of ‘bringing the action home’, so to speak.

A View to a World

Due to the Anglo-centric nature of the 007 series which stemmed from Fleming’s own xenophobia, the way other cultures are portrayed is generally like this: Western Europe is romanticised, the East and Far East are exoticized, Africa is a backdrop to villainy and places like Cuba or Istanbul are symbolically used as iconographies of cultural melting pots.

Although diverse, there’s not actually much to say about the numerous Western European cities on display throughout the series. They’re used as a pure showcase and an embodiment of the glamour of Bond, whether its Bern or Vienna, Amsterdam or Venice, Paris or Rome. Same can be said of iconic European islands like Sardinia or Corfu.

Whenever the USA pops up in a Bond film, it’s usually presented as a wacky, colourful Alice-in-Wonderland-type place, and its citizens are derided or satirised. Florida features extensively, and it’s interesting to note that Diamonds Are Forever (set in Las Vegas) and A View to a Kill (set in San Francisco) have some of the more outlandish villains in the series.

Behind the Iron Curtain

Bond can be read as pure Western Cold War propaganda- although this may be reductive since the recent films have consciously turned away from this. But nevertheless, films like From Russia With Love and The Living Daylights are perfect examples of the espionage thriller-esque tendencies at the heart of the series.

From Russia With Love’s story involves a former Soviet counter-intelligence colonel planning a honeytrap plot to kill Bond. Much of the film takes place in Istanbul, not just picturesque but also symbolic in that it’s the only city that geographically straddles both Asia and Europe (Istanbul also features in The World is Not Enough and Skyfall). The climax then places Bond behind enemy lines on the Orient Express, which stops at Belgrade and Zagreb (in former Yugoslavia, now in Serbia and Croatia respectively).

The Living Daylights once again grounds the series in Cold War reality of the late 1980s after two decades of a more irreverent trajectory. The first act unfolds in the border city of Bratislava, Czechoslovakia (in modern-day Slovakia), literally on the brim of the Iron Curtain. Bond is tasked with aiding the defection of a KGB general who, spoiler alert, turns out to be the baddie. Even the means of defection are rooted in reality- Bond and General Koskov use the Urengoy-Pomary-Uzhhorod gas pipeline to cross the Austrian border.

What has aged horrendously is the film’s third act in which Bond aids a Mujahideen (meaning jihadists, in this context Afghan rebel fighters) group against the Soviet Army. Watching this in 2020 is uncomfortable to say the least, considering modern connotations of jihadism. Of course the history and evolution of the various Mujahideen groups is complex, so there are conscience-clearing ways for us to watch it, but since the film portrays it in such black and white terms it’s hard not to feel a bit off.

Countries like Egypt or India are exoticized, in The Spy Who Loved Me and Octopussy respectively. It’s difficult to criticise these films because you can tell that the filmmakers’ intentions were generally harmless, aiming to showcase a foreign culture and place Bond in a unique environment. It’s unfortunate then that these films, and other in the franchise, can resort to stereotypical depictions of these foreign cultures that borders on caricature. The worst offence, of course, is in You Only Live Twice, when Bond undergoes surgery to look more Japanese… yikes!

The masterminds behind SPECTRE’s scheme in You Only Live Twice was strongly implied to be the People’s Republic of China. The presence of ‘Red China’ is felt again in the Asia-centred The Man with the Golden Gun when Bond is warned to steer clear of the mainland, after spending important parts of his mission in British Hong Kong (which is depicted again in Die Another Day after its return to China) and Portuguese Macau (shown again in Skyfall, also post-handover).

Hong Kong and Macau act as conduits into the mysterious China which was sheltered from the West for decades during the Cold War. In fact, the mainland isn’t even portrayed in Tomorrow Never Dies despite the plot revolving around the country. It’s not until Skyfall that Bond goes to the mainland, in a brilliantly impressionistic action sequence set high in the neon-lit skyscrapers of 21st century Shanghai.

We can see that through the 50-year history of the 007 series, its depiction of international locations have changed perspectives parallel to the ebb and flow of history and international relations. From what we can gather from promotional material it seems that No Time To Die will continue the tradition of country-hopping, taking viewers to glamourous locales from icy Norwegian towns to the Southern Italian coast, along with some familiar places like London, Cuba and Jamaica.